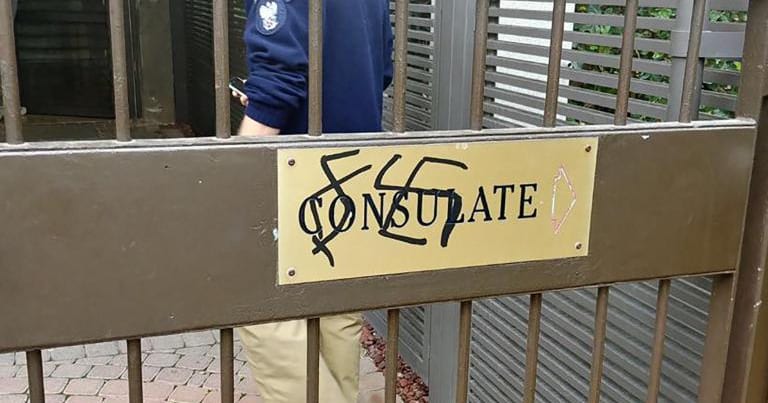 Racist profanities and a swastika have been drawn on the entrance gate of the Polish embassy in Tel Aviv.

On Sunday Poland’s embassy in Tel Aviv was daubed with swastikas and racist profanities.

The vandalism followed comments by Polish Prime Minister Mateusz Morawiecki which caused outrage by claiming Jews were among the perpetrators of the Holocaust at a security conference in Munich prompted a fresh wave of anger.

The comments, which were a response to a question by a Israeli Journalist, sparked an outcry from Israeli leaders, including Prime Minister Benjamin Netanyahu, who phoned Morawiecki to vociferously register his disgust.

Benjamin Netanyahu labelled the comments as “unacceptable” and insisted “there was no basis for comparing the actions of Poles during the Holocaust to those of Jews.”

He then added that the “distortion regarding Poland could not be corrected by means of another distortion.”

Later a Polish government spokesperson sought to clarity Morawiecki’s comments, insisting they were not “intended to deny the Holocaust, or charge the Jewish victims of the Holocaust with responsibility for what was a Nazi German perpetrated genocide.”
“The Prime Minister has repeatedly and categorically opposed denial of the Holocaust — the murder of European Jewry — as well as anti-Semitism in all its forms,” the spokesperson said in a statement.
And yesterday the Prime Minister of Poland Mateusz Morawiecki took to twitter to clarify the comments.
https://twitter.com/MorawieckiM/status/965244635277856768
https://twitter.com/MorawieckiM/status/965244918120796165
Poland was the centre of Ashkenazi Jewry before the Holocaust, with around 2.5 to 3 million Jews were thought to be living in the country before the outbreak of World War II in 1939.
Israeli police have opened an investigation into the incident.