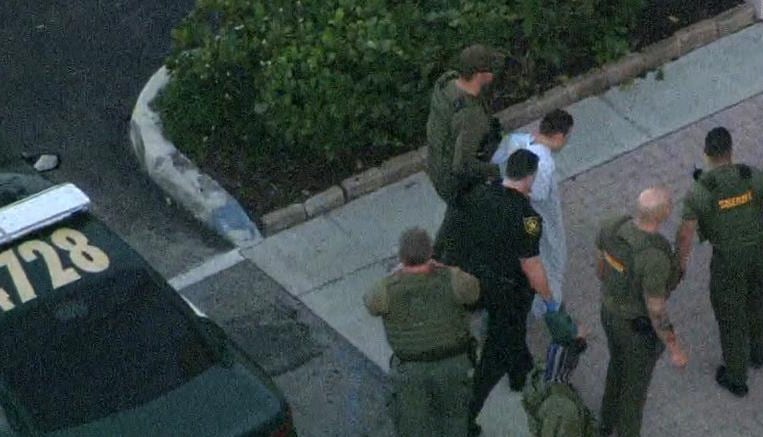 A former student unleashed a hail of gunfire in a Florida high school on Wednesday, killing at least 17 adults and children, authorities said.

The suspect used a .223 caliber, AR-15 style firearm in the shooting.

The suspect has been named as Nikolas Cruz, 19, and is a former student at the school who had been expelled.

As the attack unfolded students were forced to hide as police swooped in on the building.

It is one of the deadliest school shootings since 26 people were killed at a Connecticut school in 2012.

Florida Gov. Rick Scott ordered government flags flown at half-staff through Monday in honor of victims of the shooting at Marjory Stoneman Douglas High School, a public school of some 3,000 students outside Boca Raton.

The school is closed for the rest of the week, Broward County Public Schools Superintendent Robert Runcie said. The district will offer grief counseling to students and their families.

He added that Mr Cruz was among those treated and was released into police custody. Three people remained in a critical condition and three others were in stable condition, he said.

The victims are still being identified. Sheriff Israel said a football coach was among the dead but no names have been released.

While some left the building, others sought cover in classrooms as the school went into lock down and the gunman went on his rampage.

Some students, fearing their lives would soon be over, texted goodbyes to loved ones; others used their phones to share startling footage of the carnage on social media.

As the violence broke out chaos and the local public school district tweeted that “students and staff heard what sounded like gunfire” and witnesses said that the suspect pulled a fire alarm before the violence erupted.

Students told US media they hid under desks, in closets or barricaded doors as loud shots rang out.

Police and SWAT team members swarmed the campus and began clearing students from the school in Parkland, about an hour north of Miami, as parents and ambulances converged on the scene.

My prayers and condolences to the families of the victims of the terrible Florida shooting. No child, teacher or anyone else should ever feel unsafe in an American school.

The shooting, which is among the 10 deadliest mass shootings in modern US history, revived debate over gun control while American politicians offered their condolences.