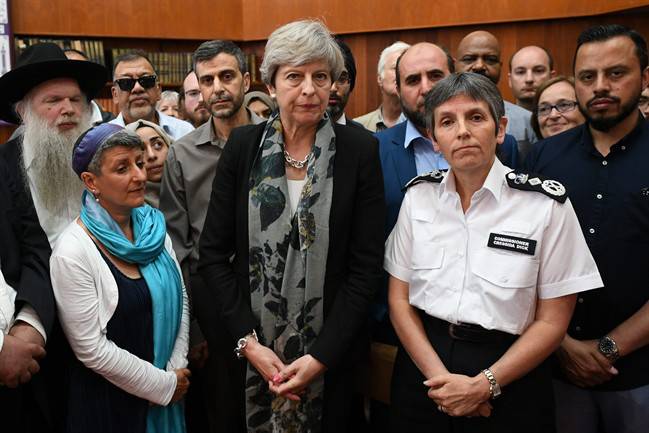 Darren Osborne, 48, was found guilty of the murder of grandfather Makram Ali, 51, and the attempted murder of nine others who were injured in the terror attack near Finsbury Park in June last year.

When the wheels of justice turn it is usually agonisingly slow but it took the Woolwich Crown Court jury less than an hour to return a guilty verdict on the Muslim-hating man who ploughed his van into a crowd of worshippers near a London mosque.

Darren Osborne, 48, was found guilty of the murder of grandfather Makram Ali, 51, and the attempted murder of nine others who were injured in the terror attack near Finsbury Park in June last year.

It was also heartening to hear from Crown Prosecution Service lawyers that although no terror charges were brought against the Cardiff man, they were in no doubt and clear throughout the nine-day trial that this was “a terrorist attack.” Sue Hemming, from the CPS, said: “Darren Osborne planned and carried out this attack because of his hatred of Muslims. He must now face the consequences of his actions.”

The rapid radicalisation of the Welshman turned him into a “ticking time bomb” when he started ranting about “all Muslims raping children and being capable of blowing people up”. His former partner said he had become “brainwashed” and it seemed the process began on TV and online.

Opening the case, Sue Hemming told the court how the area outside the Muslim Welfare House had been busy with worshippers attending Ramadan prayers on June 19. The murder victim was already in a state of collapse by the road when Osborne seized the opportunity to plough his van into Makram Ali who was being given comfort and first aid by a crowd of Muslim worshippers who had gathered around him.

He was alive and conscious before being struck by the van. Detectives found a letter in the van written by Osborne, referring to Muslim people as “rapists” and “feral”. He also wrote that Muslim men were “preying on our children”.

The trial heard Osborne became “obsessed” with Muslims in the weeks leading up to the attack, having watched the BBC drama Three Girls, about the Rochdale grooming scandal. it is thought he then became radicalised as he went online searching for more information about Muslims living in Britain.

Osborne immersed himself in rightwing propaganda online. A statement from his partner Sarah Andrews, read out at the trial, said he seemed “brainwashed” and “totally obsessed”. She said she’d been in a relationship with him for about 20 years and had four children by him. She described him as a loner and a “functioning alcoholic” who had become unpredictable.

However, what was more alarming, is that of those he began following on the social networks was one of the co-founders of the far right wing English Defence League as well as other right wing extremists on social media networks. Robinson sent him a group email saying: “There is a nation within a nation forming beneath the surface of the UK. It is a nation built on hatred, on violence and on Islam.”

Perhaps it would be prudent if counter terrorism police – assuming they haven’t already – monitor and forensically examine all of Robinson’s communications and those belonging to other bigots, racists and Muslim haters to try and discover who radicalised Osborne.
Harun Khan, Secretary General of the Muslim Council of Britain said: “The scenes we witnessed last summer were the most violent manifestation of Islamophobia yet in our country. We cannot be complacent and regard this as a one-off terrorist incident.

“We heard during the trial how Osborne was motivated by anti-Muslim groups and Islamophobic tropes not only prevalent in far right circles, but also made acceptable in our mainstream. The case tells us that we must all exercise caution when tempted to stigmatise any group of people, regardless of colour, creed or community.”

As he is sentenced on Friday, Osborne will surely go to prison for a very long time where he will be able to reflect on his evil deeds and their consequences.

But if this vile episode is remembered for one thing it is the dignified response by Muslims once Osborne was apprehended. In particular Imam Mohammed Mahmoud stepped in to protect the killer when he spotted him being restrained with his face down to the pavement.

He personally intervened “to make sure that he answers for his crime,” he told one news crew after the case. “Nobody directed any of their anger or frustration at me – maybe some disapproval, but that’s just in the fit of rage and anger. A person’s judgement is impaired and they’re blinded by anger.”

The imam’s reaction to protect Osborne helped calm the gathering crowds. He should receive a medal for his quick-thinking as it’s very easy for some to whip up a crowd into a frenzy and create a lynch mob mentality. The Muslim community in Finsbury Park did the right thing that night and on Thursday they saw justice being delivered by another group of men and women who sat for nine days during the trial listening to cold, hard facts.