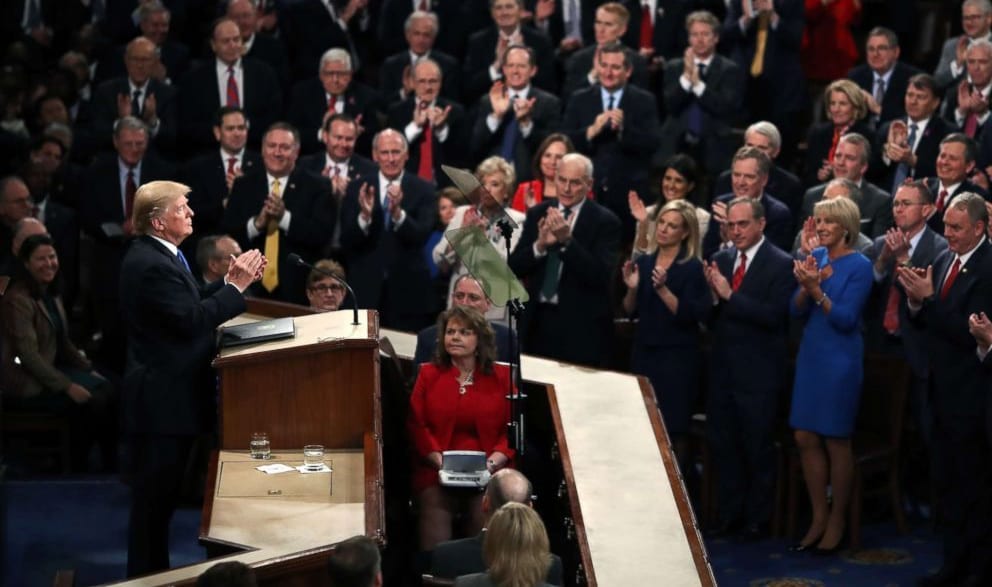 Trump – State of the Union – A New Dawn of compromise & Unity?

Trump, the most unconventional of presidents, calls for compromise at the State of The Union

It’s been a year, yes that’s right 12 months of Donald Trump at the white house. And after a roller-coaster and busy first year in office, President Donald Trump delivered his first State of the Union address to Congress and the country.

His State of the Union address and his ‘apology’to the British on TV appearance with Piers Morgan showed a measured side to the president. We are seeing a more sombre version of Trump, one who seems to almost think before he speaks and has started offering statements and responses with an almost inviting and cordial tone.

This after all, is a President who waged personal feuds against the judiciary, the FBI and the media and who has often appeared to behave recklessly against the constitutional constraints on his power.
His magnanimity seemed incongruous, given that he had previously reportedly lambasted African nations as “shitholes,” and within 6 months of him taking office – the move to impeach the president gained some momentum as the meetings with the Russians surfaced.

President Trump made a coherent, though controversial case for his presidency; As he turned to his achievements, Trump made an effective case for his economic management, a booming stock market and declaring there had never been a better time to live the American dream.

Similar to last year, the president preached national unity. The question is whether a divided American public – nearly half of whom “strongly disapprove” of the president – can still be converted. And not to forget the democrats, coming off a bitter last minute deal and barely managing to keep the government running, unity in the United states will take a lot more than a gesture at the State of the Union.

However, Trump offered to forge common ground with Democrats on emotive issues such as immigration or the meaning of patriotism, that were a contrast to the rhetoric he has used in the past.
He even offered to work on issues important to liberals like infrastructure, family leave and criminal justice reform.
The address by Trump, was packed with the calls for bipartisanship, political give-and-take and claims of soaring political achievements that are typical of all such occasions.
As much of his rhetoric appeared to anger Democrats, many of whom looked on with stony expressions. The message seemed to be, that if there is to be compromise, it will be on his terms only.

On Tuesday night he also offered some insights into the next 12 months. On immigration, deregulation, taxes and cultural flashpoints, the president offered policies – and claimed victories for accomplishments. Some of which are simply untrue.

Like his claim on Tax cuts he said “We enacted the biggest tax cuts and reforms in American history.” This tax bill doesn’t even make the top ten tax bills based on GDP. Even if it doubled in size and cost twice as much, it would still only be the eight biggest tax bill.

His claim on energy revolution is also false, he stated “We are now an exporter of energy to the world.” but the truth is is the United States has always been exporting billions of dollars worth of energy.

He also claimed victory in claiming back the land and suggested US being the main reason that ISIS have retreated into cells in Syria and Iraq, again this is untrue. The president is using to the spin of the coalition to claim victory. However, the main liberators in Syria and leading the fight against ISIS in the region has been Russia.

Trump and his team prepared a speech that they knew he could deliver.  A sweeping speech and full of victories or reforms that aren’t actually his doing. Some like the Justice reforms were a reaction to him losing battles against the justice system. So instead he led reform by retiring old judges with new Trump sympathisers.

But as the last standing ovation subsided, questions remained as the democrats were unconvinced by his performance. How many hours, or days, will Trump’s optimistic vision and open hand for bipartisan compromise last, given his more usual erratic and confrontational behaviour.

Experience from last year suggests that the authentic version of Trump is not the one on display at the State of the Union and the unrestrained bullish personality will be back on display on Twitter very soon.

Last year at his first State of the Union, shared with president Obama, it took Trump two days to take to twitter and lash out at the President.

Trump – State of the Union – A New Dawn of compromise & Unity?