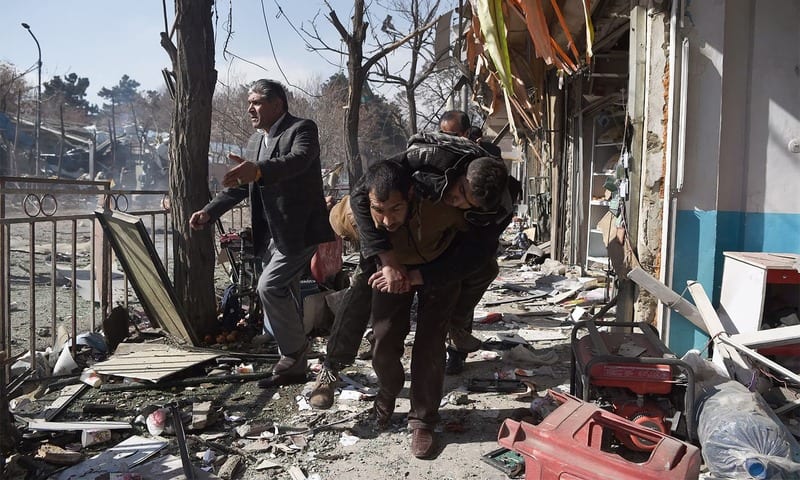 Peace talks are the only way forward in Afghanistan. Bombs and bullets are not the answer, says Yvonne Ridley

I can’t imagine the misery and heartache in Kabul today over the latest car bomb attack on the war torn Afghan capital where 100 innocents were killed and 235 wounded. Today, for some relatives, the tragic search to find and identify their loved ones continues.

The attackers packed an ambulance with explosives before driving past a police checkpoint to reach a crowded street in a district full of government buildings and embassies.

Coming hard on the heels of an audacious attack on a hotel in the Afghan capital in which 22 people were killed, some serious questions must now be asked about future strategies for Afghanistan which has been in the grip of war and conflict since October 2001.

The Taliban has claimed responsibility for Saturday’s assault, the third major attack in the past week while a spokesman for the interior ministry accused the Taliban-affiliated Haqqani network, which has been behind many of the biggest strikes on civilian targets in Afghanistan i the last year.

The truth is bombs and bullets do not bring peace whether they’re fired from Western soldiers or Taliban fighters and their supporters – it was an observation I made back in 2001 when US and British bombs rained down on Afghanistan after the Bush-Blair war was launched.

I was a prisoner of the Taliban for 11 long days and in that time I felt the full terror first of being a hostage and then of experiencing what it was like to see, hear and feel British and American cruise missiles exploding all around the prison where I was held. You can hear a cruise missile from 22 miles away and these were dropping within a few hundred yards. I really thought my time had come.

When I was released, unscathed and unharmed, on the orders of the Taliban’s spiritual leader Mullah Omar, I immediately joined the Stop the War Coalition in the UK on reaching London. Nothing like a cruise missile landing nearby makes you realise the futility of war. Bombs do not discriminate … they will target and rip apart limb by limb men, women and children regardless of faith or nationality.

To the annoyance of British government officials in January 2002 I addressed a conference in London and said the war would go on for years because, having spent 11 days in the company of the Taliban, I realised these people would never give up and surrender their country.

I was sneered and laughed at by some men from the Ministry of Defence, and I clearly remember one speaking at the same event predicting the war would be over by the end of the month (January). Afterwards I made a bet – a bottle of Chivas Regal  – that it would go on for many years to come.

Of course I no longer drink these days but I must be owed a case of the whisky by now. It gives me no pleasure, however, to say: “I told you so.” Since my first Afghan experience, I’ve returned to the country many times and have even been shot at by Taliban fighters on the road to Gardez in Paktia Province.

More recently I’ve sat in the company of some senior members of the Taliban shura and while they are still a bunch of scary men, they do talk and they do listen. They kept emphasising to me this was a war they never wanted and tried all ways to reach out to the Bush Administration to avoid hostilities.

If only both sides had sat down and opened up back in 2001. It was an incendiary time, I recall. The US was reeling from 9/11 and in great pain. Someone had to pay and although there were not Afghans involved in the September 11 attacks, Afghanistan was targeted for payback.

I am more convinced than ever that the only way forward now for any hope of peace ever coming to this amazing country and its beautiful people is through parley.

The longer this war goes on the more outside players will interfere and fuel the discontent, murder and mayhem that is all too evident. The Afghan government has condemned the bombing as a crime against humanity, and accused Pakistan of providing support.

They may well be right. But the killing will continue until someone brokers a ceasefire between all parties. If this was happening in the heart of America right now a peaceful solution would be found immediately just as a solution was found to end The Troubles in Northern Ireland.

Afghan people cut, hurt and bleed just like Americans and British people and a mother in Kabul feels just as much pain and anguish when her child is blown up as any mother anywhere else in the world.

Condemnation from the White House or turning off the lights of the Eiffel Tower in Paris, as was done at midnight on Saturday as a mark of respect for the dead and injured, is not going to stop the carnage. The only way forward is talks. So who is going to make that first brave step? If I had the power and influence I’d be making that call now.