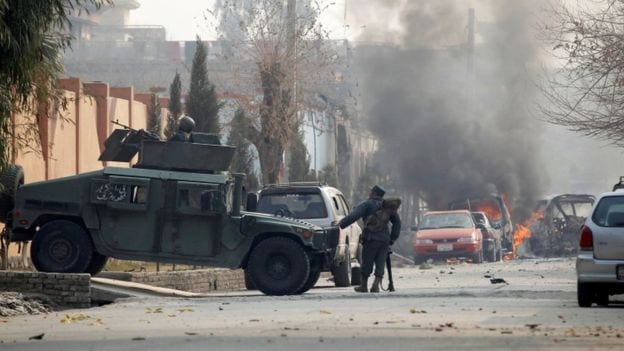 ISIS Militants attacked the offices of British aid agency Save the Children in Jalalabad, eastern Afghanistan, Wednesday, killing a police officer and a civilian

Attackers have detonated explosives before storming the offices of the British charity Save the Children in the eastern Afghan city of Jalalabad. Which is close to the Afghan border with Pakistan.

The attack started at about 09:10 local time (04:40 GMT) on Wednesday when a suicide bomber detonated a vehicle explosive at the entrance to the Save the Children compound.

At least two people have been killed, at least 20 people were injured in the assault, which started when a suicide bomber detonated explosives at the gate. It is believed about 50 staff were in the building at the time.

The Islamic State group has said three of its fighters are behind the attack, which is said to have now ended.

About 45 people were reported to have been rescued from the basement, as fighting continued on the upper floors.

The Islamic State group said in a message on its news outlet Amaq that three attackers and an explosives-laden car had targeted “British, Swedish and Afghan institutions in Jalalabad”.

#Nangarhar – gunshots ring out as clashes continue between insurgents and security forces after militants launched an attack on the #SaveTheChildren organization in #Jalalabad city #Afghanistan pic.twitter.com/sqCYDbmHEg

The charity has been working in Afghanistan since 1976. It currently runs programmes across 16 provinces in Afghanistan. The organisation says it aims to provide better access to education, healthcare and essential supplies to children across the globe.

We’re devastated by horrific news of an ongoing attack targeting our Save the Children compound in #Jalalabad #Afghanistan, with reports of several injured. pic.twitter.com/KKVihrUF9X

Save the Children has temporarily suspended all of its Afghan programmes. But it said it remained “committed to resuming our operations and lifesaving work as quickly as possible”.