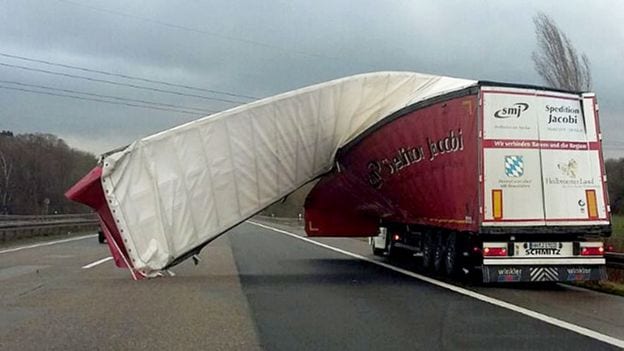 In Germany at least 17 trucks have been blown over by the strong winds.

The Dutch Railways operator said power lines had been damaged by the wind. Leaving commuters stranded.

Storm Update: Five people have been killed in storm-related accidents as hurricane-strength winds tear across northern Europe. The storm, which has been called Friederike in Germany, is due to cross the country from west to east before reaching Poland overnight.

So far it has caused travel chaos on the roads, air travel and rail travel. As well claiming lives in Holland and Germany.

Three people have been killed after they were hit by falling trees and debris in the Netherlands and one in Germany.

Another fatality involved a German who was killed in a collision when his van was blown on to the wrong side of the road.

Facing gusts of up to 140km/h (90mph), Germany’s train operator Deutsche Bahn cancelled all long-distance services for the rest of Thursday. Following that many regional train services have also cancelled as the the operators cant guarantee the safety of the passengers.

Flights at Schiphol airport in Amsterdam – one of the busiest in Europe – were briefly suspended and two of its three departure halls were closed after roof plates were blown off the terminal building.

More than 300 flights were cancelled and the airport said passengers should check their flights status online or contact their airline, before embarking on a journey to the airport.

Other airports in Germany and Holland are all reviewing the latest weather updates in order and will make announcements if the storm becomes worse.

German meteorologists, via the media outlets are warning people to stay indoors, and many schools are closed.

The storm which caused high winds and snow in the UK on Wednesday night and Thursday morning, bringing down trees in Scotland and northern England and leaving about 30,000 people without electricity for their homes. Has moved on into Europe and is causing more destruction along its path.

My Tweets
We use cookies to help identify your computer so we can tailor your user experience, track shopping basket contents and remember where you are in the order process. WTX News Our Cookie Policy
Meghan Markle is causing a sparkle with the wedding arrangements
Ankara decides it’s pay back time
To Top
Weekly