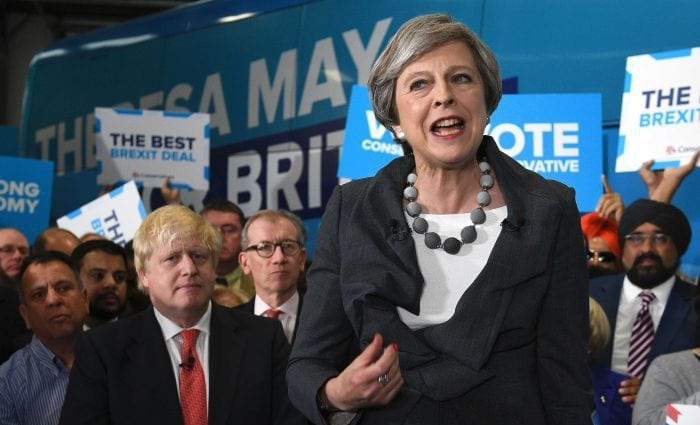 Boris waits in the wings like a predator ready to pounce – and he makes no secret about it – is he too big kick out?

Theresa May will reshuffle her cabinet on Monday, with junior ministerial jobs being reassigned on Tuesday.

Theresa May will move or sack at least six members of her cabinet in a New Year reshuffle tomorrow designed to refresh her top team and solidify some sort of power in her cabinet.

The reshuffle comes after two resignations and one sacking from the prime minister’s cabinet in the last two months.

Sir Michael Fallon was the first to resign from his post of defence secretary in November 2017 amid allegations around his conduct.

One week later, Priti Patel quit her job as international development secretary, after a row over unauthorised meetings with Israeli officials.

Mr Green – one of Mrs May’s closest allies – was then fired from his position in December after making “misleading statements” to the press about pornography found on his office computer in 2008.

In order to start shaping her cabinet to attract a more socially savvy audience many positions will be up for grabs.  Justine Greening, Greg Clark and Andrea Leadsom are seen as vulnerable. Mrs May will use the reshuffle to make her Government more diverse and youthful.

Mr Johnson wrote a newspaper article last month outlining his vision of Brexit just days before Ms May made a major speech on the subject.

Although Boris is a senior member of her cabinet he is a constant thorn and his vulture-resque political aspirations to be the Prime Minister is constantly on offer.

While professing loyalty, his interventions have been seen as undermining Ms May and causing unnecessary unrest ahead of the party’s conference last year. He is waiting in the wings for the opportune moment to strike, which he will.

The Prime Minister has been forced to make changes to her top team following the resignation last month of Damian Green as First Secretary of State after he admitted to lying about the alleged discovery of pornographic images on his Commons computer during a police raid.

It is unclear whether Ms May will announce a direct replacement for Mr Green who was effectively her Deputy Prime Minister.

It has also been circulating that Boris Johnson will resist attempts to move him out of the Foreign Office, his allies said, after reports he might be given a lead role in delivering Brexit by Theresa May in an upcoming reshuffle of her ministers.

Health Secretary Jeremy Hunt had been widely seen as the favourite for the post, although reports have suggested that she is reluctant to move him in the midst of an NHS winter crisis.

It is also significant to note that had the PM had a more solid position after her snap election last year, Boris would have been very close to the axe. Her weakened position is only part of the story, she also needs strengthen the position of her government and thus be able to pass legislation. Following her embarrassing loss earlier this year.