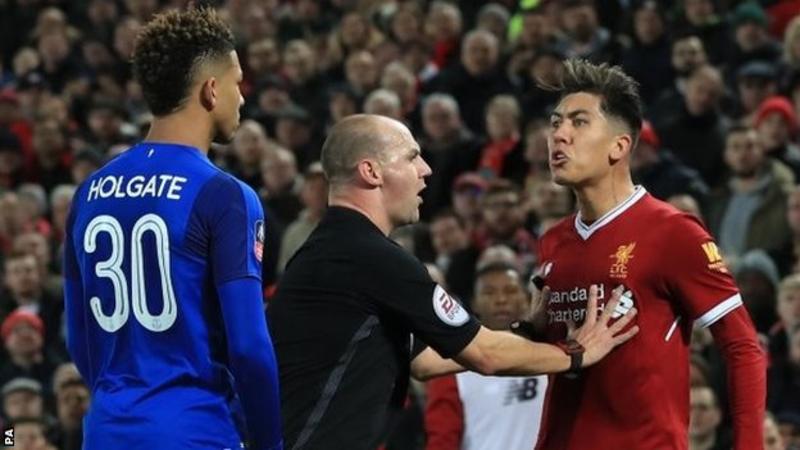 The Football Association is expected to launch an investigation into allegations by the Everton defender Mason Holgate that he was racially abused by Roberto Firmino during Liverpool’s FA Cup win at Anfield.

Merseyside derbies can always prove difficult occasions for referees – and this was no different as Bobby Madley had to deal with several contentious incidents.

In a fiercely fought game there was a first-half flashpoint Holgate clashed with the Liverpool forward by the side line. As the ball rolled out of play for a liverpool thrown in, Holgate foolishly pushed Reds forward Roberto Firmino over the advertising hoardings and into the crowd head first.

Firmino reacted furiously and ran towards the Everton defender, who erupted after something was said by the Brazil international. Holgate had to be restrained by several team-mates and appeared to complain to the referee with the Everton defender left furious after the pair subsequently exchanged words. Robert Madley, that a racist term had been used.

During the game, no action was taken against Holdgate for the petulant and potentially dangerous push on Firminio. And great credit to the referee for not allowing the incident overshadow the game during the 90mins.

Holgate’s allegation is expected to be included in Madley’s match report, which will be submitted to the FA, who will then determine whether further action is necessary. The Football Association is expected to launch an investigation into allegations by the Everton defender Mason Holgate that he was racially abused by Roberto Firmino.

A Liverpool spokesperson said: “The club and the player will fully co-operate with the relevant authorities to ensure the facts are established in a thorough manner if deemed necessary or requested. While that process is ongoing we will not be making any further comment.”

Sam Allardyce refused to comment on the incident but Everton’s director of football, Steve Walsh, was involved in discussions with the club’s media department after the Cup tie.

“I’m telling you nothing until whatever systems are used to find out exactly what happened or didn’t happen,” the Everton manager said.

James Milner opened the scoring, before Gylfi Sigurdsson’s equalised. Before Virgil van Dijk made a dream start for Liverpool following his £75m move from Southampton as his late header settled a highly competitive FA Cup third round Merseyside derby against Everton at Anfield.