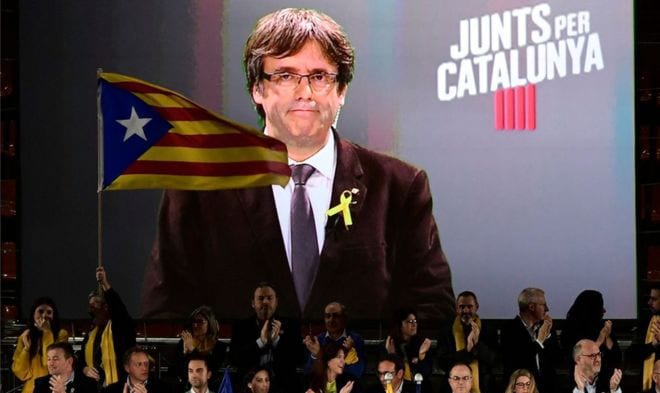 The Spanish Independence movement – A whisper to a scream!- Mr Puigdemont campaigned via videolink from self-imposed exile in Belgium – and it worked, as his JxCat party got the most pro-independence votes.

The Catalan election saga continues as voters in the Spanish region of Catalonia have delivered a blow to Madrid by backing pro-independence parties in regional elections.

Former Catalan President Carles Puigdemont celebrated the results from Brussels where he’s been in self-imposed exile since Spanish authorities announced they were seeking his arrest.

Puigdemont was pushed from power after his government held an illegal independence referendum and MPs declared the region’s unilateral independence from Spain.

The Spanish government had called an early election in the hope of quelling the separatist movement, whose push for independence triggered the country’s worst political crisis in decades.

But Madrid’s hopes were clearly dashed. With more than 99% of the vote counted, no single party gained an outright majority but the three separatist parties together took 70 seats. They needed 68 to keep their grip on the 135-seat Parliament.

To govern the pro-independence parties will need to join in a coalition. Such a scenario would push the Madrid-Barcelona relationship back to where this all began three months ago, with a provocative separatist government in Barcelona rattling Madrid.

The anti-independence Ciutadans (Citizens) did win the most seats of any party, but not enough to form a majority government.

The results, however, do not necessarily mean easy sailing for the independence movement. There will probably be intense negotiations, particularly over the issue of who would become Catalonia’s next president.

A triumphant Mr Puigdemont called for direct talks with Mr Rajoy, but the Spanish leader rebuffed him soon after, saying only that he was open to dialogue with the leader of a future Catalan government.

The question is further complicated by the fact that Puigdemont is in self-imposed exile in Brussels. He said last week that he would come back if he won, but he could still face arrest by Spanish authorities over the illegal referendum if he does.

It is Spain’s biggest political crisis since democracy was restored in 1975, after the death of military dictator Gen Francisco Franco.