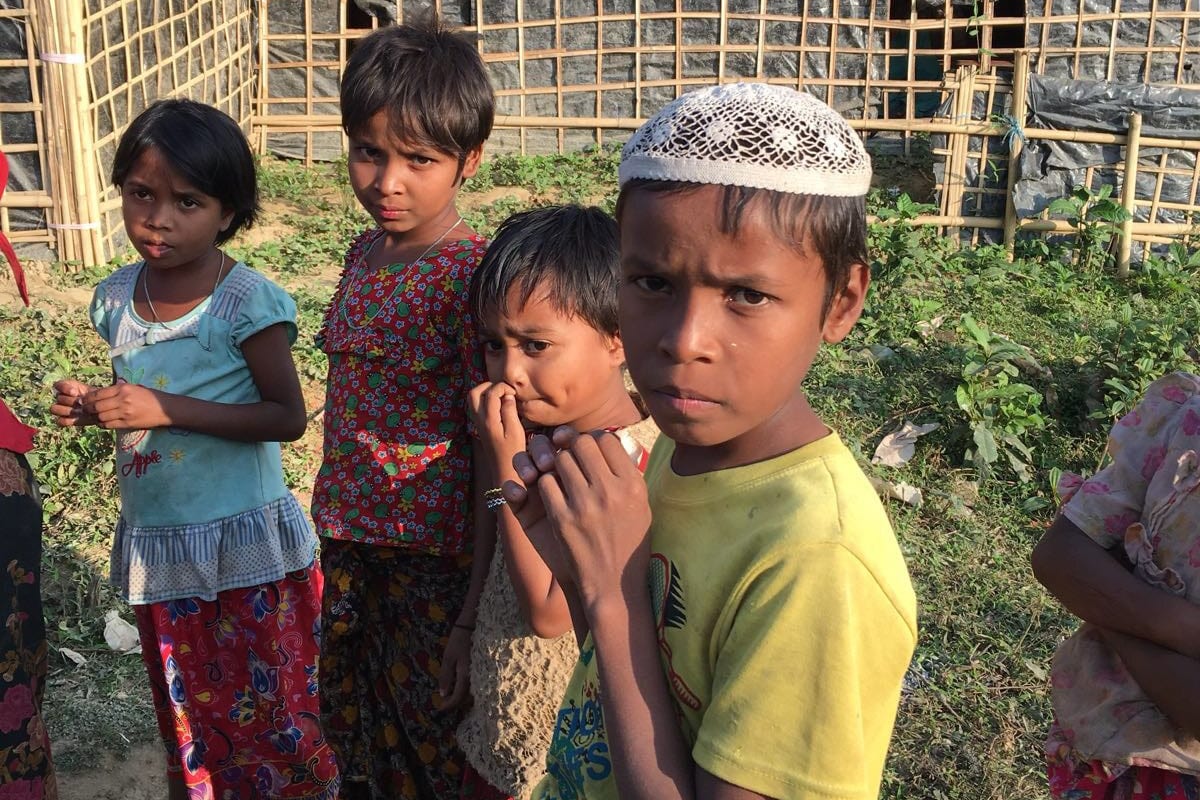 The evidence is out there for sure which is why the remote Rakhine State is still off limits to all visitors especially international delegations and journalists. Surprisingly, I haven’t met any UK based charities so far.

I have spent the last few days with an all-woman group of human rights lawyers documenting harrowing eyewitness accounts of the industrial scale violence meted out to the Rohingya refugees by the Myanmar military.

It doesn’t take the United National Security Council, a whole host of western governments or hundreds of aid workers to tell you what is going on but if you want it spelled out here it is: G-E-N-O-C-I-D-E.

Baffling is just one word to describe the inaction of the international community which appears to be doing little or nothing, for that’s what it seems like as I sit on the Bangladesh-Myanmar border where 670,000 Rohingya Muslims are living in a vast makeshift city.

I have spent the last few days with an all-woman group of human rights lawyers documenting harrowing eyewitness accounts of the industrial scale violence meted out to the Rohingya refugees by the Myanmar military. Photo Copy right WTX News

If Myanmar’s intention was to ethnically cleanse the Rohingya people from its country then the state’s brutal tactics have worked – and apart from the ‘fragrant’ Aung San Suu Kyi’s social calendar being much reduced, due to her social pariah status in civilised circles, very little has impacted the Myanmar regime so far.

The UN has admitted the Myanmar regime is guilty of “textbook ethnic cleansing” while the so-called lucky ones made it to neighbouring Bangladesh.

However “lucky” is not a term I would use within earshot of those sitting in the refugee camps. Everyday for the last week the most wronged people on the planet have queued patiently to give their harrowing, eye witness accounts to the team from Protect the Rohingya which has been working to highlight the plight of these people since the atrocities of 2012.

Young and old, men and women and even children have come to give testimony.

Uncomfortable as it may seem, had the international community charged the Myanmar military with war crimes back then it seems unlikely that the carnage and suffering in August 2017 would have happened.

Nothing focusses the minds of tyrants, rogue generals and dictators like the threat of being hauled in front of an international court and being held on charges of war crimes and genocides.

However, according to some critics like Rwanda’s Paul Kagame and Sudan’s Omar al-Bashir, it seems as though the only purpose of the International Criminal Court (ICC) is to pursue African leaders.

Certainly it appears the African Union’s position is against the ICC claiming the continent’s leaders are victims of a biased agenda and skewed justice. The AU says the ICC disproportionately targets Africans while other African countries including Kenya, Eritrea, Uganda, Zimbabwe and Libya have called for a collective withdrawal of African nations from the court.

None of this, however, serves to help the Rohingya People who are among the most gentle and patient race I’ve come across in 40 years of journalism.

Canada’s special envoy to Myanmar, Bob Rae, said earlier this week that the eyewitness accounts of violence against hundreds of thousands of Rohingya Muslim refugees must be documented so those responsible can be brought to justice.

Fine words indeed, but as I sat with a team of lawyers from South Africa documenting these atrocities no one else appears to be doing the same, certainly not at government level.

To be fair to Rae, he has been out here to listen first-hand to the eye witness accounts which he has described as “both chilling and graphic”. He added: “The gathering of evidence about particular events has to be thorough and systematic and relate to specific events, in particular places, at particular times.”

He has produced a holding report pending further investigations and does not use the term “ethnic cleansing” which again is baffling. Why is the international community tip-toeing around this issue? Scores and scores of statements have been taken this week and while each eye witness account given to the lawyers has been graphic and detailed and harrowing, they vary widely with the exception of brutality and violence meted out to the Rohingya.

I have spent the last few days with an all-woman group of human rights lawyers documenting harrowing eyewitness accounts of the industrial scale violence meted out to the Rohingya refugees by the Myanmar military. Photo Copyright WTX News

Documenting the war crimes (for that is exactly what we are dealing with) is not easy. The graphic detail and eye witness accounts given so far have exposed an industrial scale operation which can not have been planned in a matter of days by the military. The wide scale of brutality appears to have been planned to the minute detail with the exception of one thing: Myanmar’s military does not appear to have resolved the issue of getting rid of the bodies.

Witness after witness told us how the military and their buddhist cohorts had great difficulty in getting rid of the dead. Clumsy human bonfires and pits of human debris would not burn easily despite gallons of fuel being used. The evidence is out there for sure which is why the remote Rakhine State is still off limits to all visitors especially international delegations and journalists.

* Alongside working for WTX News Yvonne Ridley is altruistically engaged with ‘Protect the Rohingya lawyers’ who are being supported by the charities Salaamedia Foundation and International Relief Organisation. Watch out for her special Christmas Day report from the camps in Cox’s Bizar.