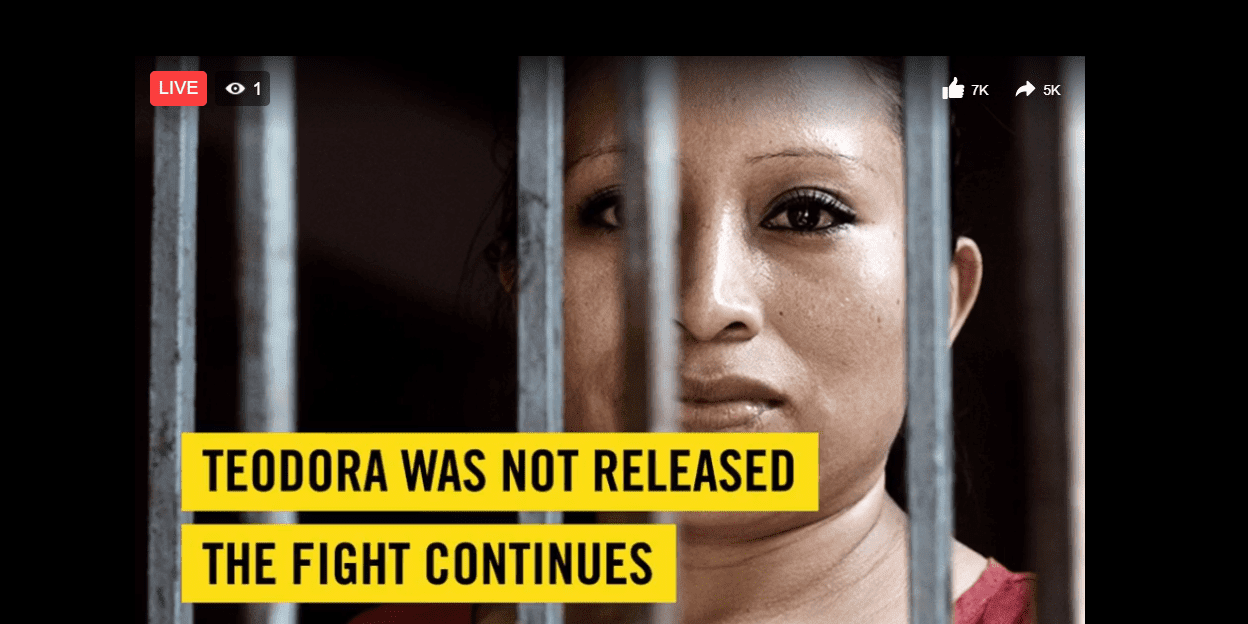 We live in an unjust world where the laws are so skewed that just being a woman is enough to make you guilty in court.

That’s how I felt on hearing of a court’s decision to send a woman to prison in El Salvador for 30 years after she had a miscarriage.

It seems if you have the misfortune to lose a baby during pregnancy the state will turn you into a criminal instead of showing compassion.

That is exactly what has happened to Teodora del Carmen Vásquez who is being punished for nothing more than her gender. There is no other reason to explain away the decade-long nightmare she has endured … and today the nightmare continues for the 37-year-old.

She was sent to prison for having a stillbirth in 2007 because under El Salvador’s backward and primitive anti abortion laws any woman who miscarries is treated with suspicion. After the rapid onset of serious pain while she was at work, Teodora was found by police as she lay in a pool of blood after she called the emergency services for help.

Instead of treating her with sympathy as she lost her near full-term baby, she was arrested and later sentenced to 30 years for ‘aggravated homicide’ under El Salvador’s total ban on abortion.

This week an El Salvador court rejected her appeal against the sentence of aggravated murder imposed in 2008. Her lawyers lodged the appeal after presenting testimony that the baby was born dead. The court said it relied on the government autopsy’s conclusion that the girl was born alive and asphyxiated.

Two new medical experts gave evidence to the contrary including a Guatemalan forensic scientist who said that the original autopsy of the newborn baby had been “inadequate”. But the judges hearing the appeal decided to uphold the sentence anyway, despite the expert evidence.

Amnesty International’s El Salvador representative Ina Strøm, who was in the courtroom, said: “The room was in tears when we heard the verdict. The family is devastated. This is such a tragedy and the injustice is beyond words. The judge referred to common sense when giving the verdict, which is another way of saying they will just ignore the evidence.

“As the lawyer pointed out, if someone is intending to kill their baby, they would not call 911 as Teodora did. Teodora suffered a stillbirth and should not be imprisoned.”

The non-profit Centre for Reproductive Rights, which has campaigned for the release of dozens of other women convicted of murder in El Salvador for obstetric emergencies, said the decision was “another slap in the face for Teodora, who never committed any crime”.

Human rights group Amnesty International’s Americas director Erika Geuvera-Rosas says the court case illustrated “everything that is wrong with the justice system in El Salvador, where human rights seem to be a foreign concept. Instead of punishing Teodora for being a woman, authorities in El Salvador must urgently take a hard look at their outrageous anti-abortion law and take immediate steps to repeal it.”

El Salvador is one of six Latin American countries with total bans on abortion and sadly Teodora is not alone in suffering the full impact of these unjust, primitive laws.

If you’re touched by this story please send it to your friends on Facebook, Twitter and any of the other social networks with the #Iamlistening hashtag and click here for more information: https://www.iamlistening.org