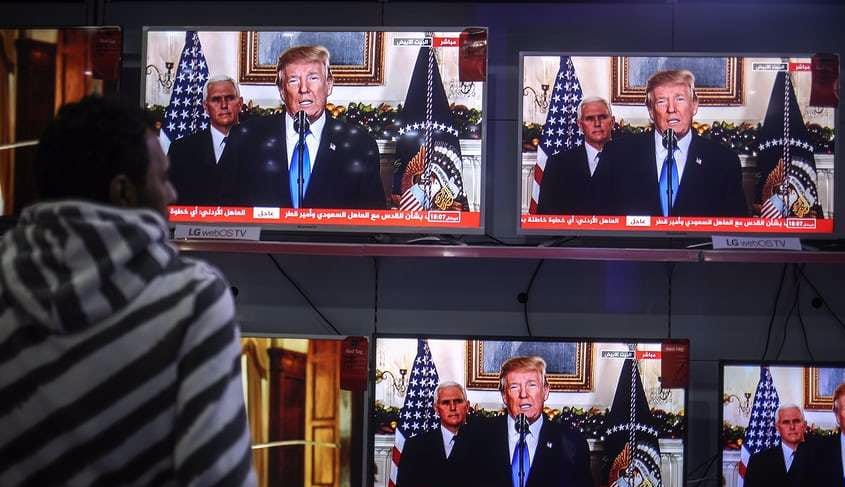 These particular Christians firmly believe the Jewish people must control Jerusalem in order to build a third temple on Temple Mount, which is currently occupied by the al-Aqsa mosque, the third holiest site in Islam.

Anyone who believes Donald Trump’s announcement to recognise Jerusalem as the capital of Israel is a great idea is possibly delusional, insane or a religious extremist.

Watching the former TV game show host from the Apprentice blunder through Middle Eastern politics is like watching a child searching for a gas leak with a naked flame.

Trump is playing a very dangerous game but he is being cheered on in America by 50 million evangelical Christian Zionists who believe Israel is destined to play a vital role in a Biblical prophecy which will lead to Armageddon, or the end of the world, and the Second Coming of Jesus Christ.

And with his eyes on a Second Term as US President, Trump needs the support of these right wing religious fanatics to which both he and Israeli leader Benjamin Netanyahu are courting.

These particular Christians firmly believe the Jewish people must control Jerusalem in order to build a third temple on Temple Mount, which is currently occupied by the al-Aqsa mosque, the third holiest site in Islam. The first two Jewish temples were destroyed by the Babylonians and the Romans many centuries ago.

Apparently 9/11, Hurricane Katrina and some of the wars unfolding in the Middle East and Asia are all seen as signs heralding the coming of the end of the world and Jesus Christ’s return. These evangelicals genuinely believe they will be swept up from earth with all the bad folk being left behind as the chaos ensues.

However central to all of this is that Israel must remain a Jewish state. Salvation will be delivered through their ‘Armageddon’ belief as long as Jews maintain control of Israel and Jerusalem, and retake the Al-Aqsa mosque before Jesus can return.

Talk about a self-fulfilling prophesy of death and destruction!

Evangelical Christians make up the biggest pro-Israel bloc in the US and according to recent research in a Pew poll support for the Zionist State is stronger among American evangelicals than it is even among US Jews with 82 percent of white evangelicals believing God gave Israel to the Jewish people.

These religious Christian extremists genuinely believe Trump’s moving the US embassy to Jerusalem could help hasten the end of the world. The truth is liberal Jews detest the conservative politics of these evangelicals nearly as much as Muslims.

However this isn’t some small, whacky sect; as I said before this is 50 million Americans so you can see why they’re extremely useful to the likes of Netanyahu and his Zionist project almost as much as they are important to Trump who wants that second term as leader of the so-called Free World!

Before any of this can happen a person called the Antichrist will rise to power and make peace in the Middle East. This good guy will promise peace and stability using his natural charm and super intellect. Believe it or not many Christian internet forums were convinced that Tony Blair was the Antichrist!

Others tipped for the role have been Prince Charles, the heir to the British throne, Russian leader Vladimir Putin and Recep Tayyip Erdogan. Take your pick.

While Prince Charles is unlikely to make a public statement over Jerusalem being promoted as Israel’s capital by Trump it’s highly unlikely he would give royal approval and both the Turkish and Russian Presidents have denounced Trump’s declaration thereby ruling themselves out as contenders for the Antichrist.

It would make a good sketch for a comedy writer but sadly try convincing 50 million evangelicals that they’re totally wrong … remember these are the lot who voted Trump into power in the first place.

Hamas has said Trump’s actions have opened the gates of Hell and, for once, Christian evangelicals probably agree with them!