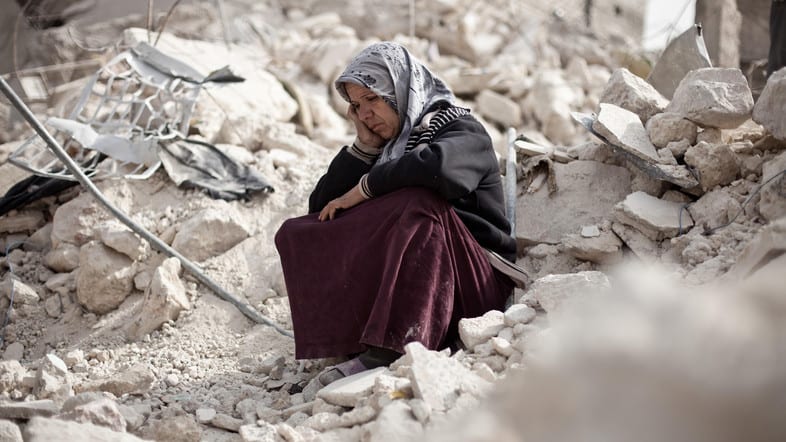 Proxy wars and hidden agendas – the mask of peace talks in Geneva will fail unless all parties show up. In the meantime more innocents are dying.

Syria’s civil war, now in its seventh year, has killed hundreds of thousands of people and created the world’s worst refugee crisis, driving more than 11 million people from their homes.

Meanwhile UN-backed peace talks scheduled to continue in Geneva face uncertainty. After months of stalemate, the talks are expected to focus primarily on a new constitution and elections.

Yet more innocents are dying. Airstrikes and shelling killed at least 57 people Sunday in two separate towns in Syria. The continued fighting on Sunday came two days before the start of peace talks in Geneva, to be followed by a second session in December.

In the ISIS-held village of al-Shaafa, in Syria’s eastern Deir Ezzor province, Russian airstrikes killed 34 civilians. Al-Shaafa sits on the eastern bank of the Euphrates River, one of the last areas occupied by ISIS in the region.

Many of those wounded in the airstrike are in critical condition, which could cause the death toll to rise.

In another airstrike at least 23 people have been killed by airstrikes in Eastern Ghouta as Syrian government forces intensify their efforts to retake the rebel stronghold.

Ghouta has been under siege since 2012 and the area is gripped by a humanitarian crisis. The UN says residents are so short of food they are forced to eat trash and children eat only on alternate days.

The area is part of a so-called de-escalation zone where Russia has brokered deals to ease fighting between rebels and regime forces.

United Nations mediator Staffan de Mistura said that the Syrian government has still not yet confirmed that it would attend an eighth round of peace talks scheduled, but “indicated that we would be hearing from them soon.”

Syria’s government and opposition will start a new round of UN-brokered talks in Geneva on Tuesday, but there is little optimism for progress towards ending the seven-year conflict.

Opposition delegates are pushing for the removal of Syrian President Bashar al-Assad and have called on Russia to pressure him into negotiations on a political transition followed by a new constitution and free elections.

Since the Syrian conflict began in 2011, an estimated 400,000 civilians have been killed, according to the United Nations. In a country where foreign politics is dictating the peace accords it is unless all parties come to the table, peace for the Syrians remains unlikely.