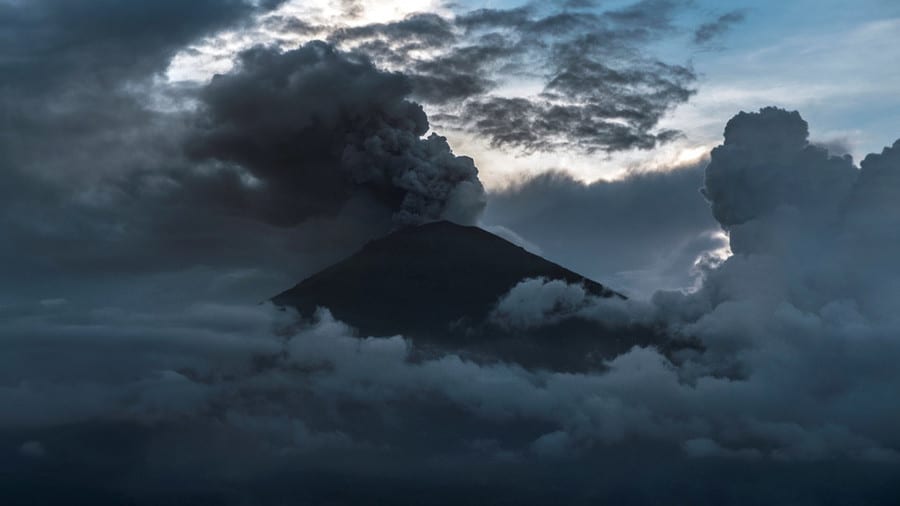 Fears of an imminent major eruption of Bali’s Mount Agung have increased and the evacuation zone around the volcano has been widened. Indonesian authorities have raised the state of alert to its highest level.

Volcanic eruptions from Mount Agung on the Indonesian resort island of Bali have forced the closure of the island’s main airport and forced the evacuation of thousands of residents living in the northeast part of the island.

Thick ash started shooting thousands of meters into the air above Mount Agung on Saturday, driving east and southeast along the archipelago, causing dozens of flight cancellations.

The National Board for Disaster Management raised the alert to level four from 06:00 local time (22:00 GMT Sunday), because of “the possibility and imminent risk of disaster”.

The volcano was seen emitting “continuous ash puffs” occasionally accompanied by “explosive eruptions” and “weak booms” that could be heard 12km (7 miles) from the summit.

According to Australia’s Bureau of Meteorology, by Monday morning the continuous cloud of smoke had reached as high as 9,100 meters (at least 5.6 miles).

Over the weekend, 24,000 residents were evacuated from across the island as the national board raised the the alert level, efforts have intensified as residents and tourists of the island are evacuated to safety.

Bali is a popular tourist destination which welcomes more than a million visitors from  Australia every year, as well as hundreds of thousands of Chinese guests.

The main tourist stretch of Kuta and Seminyak is about 40 miles from the volcano, beyond the exclusion zone. But the ash clouds have prompted officials to shut down Bali’s Ngurah Rai airport from Monday to Tuesday morning. All flights during this period have been cancelled.

The airport on neighbouring island Lombok reopened on Monday morning after it was shut briefly.

The evacuation zone is based on the last time Agung erupted in 1963, killing more than 1,500 people and destroying many villages, some on the slopes of the mountain. It is home to more than 130 active volcanoes.

Everyone in area be careful and we hope all are safe. #agung #volcano #eruption pic.twitter.com/mHV4MYNqA1