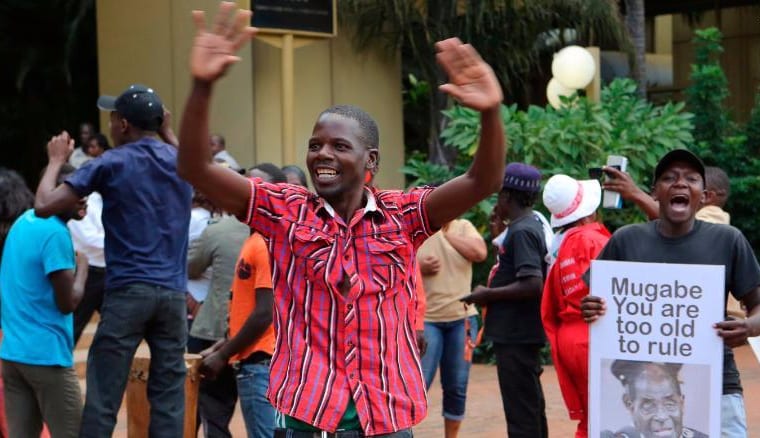 Let’s hope the Butcher of Bosnia will not serve his sentence in such luxurious surroundings as those being offered to dozens of prominent Saudi figures suspected of corruption in the Kingdom of Saudi Arabia.

Apparently 201 are being held in the five star Ritz-Carlton in Riyadh. While the identity of many of the accused are still secret, I’m told there’s around a dozen princes who’ve been rounded up and detained in the hotel as part of an anti-corruption drive by Crown Prince Mohammed bin Salman.

Doing ‘porridge’ in Saudi is obviously not that tough … for a privileged few!

So Saad Hariri “suspends” his shock resignation … no surprise there, then. It would be a laughing matter but when Saudi and Iran are treating Lebanon like a pawn in one of the most volatile regions in the world, it’s most definitely not funny. Can Lebanese politicians do something really radical for a change? Sort out your politics at home, please and can everyone else stop meddling!

My admiration (and sympathies) to New Yorker Joe Kirkendall who has been watching events unfold in Zimbabwe with increasing self interest. Perhaps his latest tweet indicates he is hoping his fellow Americans can do the same with Trump!

Hey, if Zimbabwe can do it, WE CAN TOO!

In Scotland where politics have always been brutal and unrelenting, an often cited criticism of First Minister Nicola Sturgeon is that she should focus more on “the day job.” This stinging rebuke usually comes from her anti-independence rivals in the Scottish and Conservative and Labour parties, namely Tory leader Ruth Davidson and recently departed Labour Leader Kezia Dugdale.

I was trying to canvas their latest views but Ms Davidson was too busy cooking up a storm in a one-off Great British Bake Off show for charity while Ms Dugdale was enroute to spend several weeks in the jungle for the Australian-based show: I’m A Celebrity, Get Me Out Of Here!

I’m quite sure Ms Sturgeon will be sharpening her acerbic tongue for their return to Holyrood … whenever that is.

I am indebted to Ronan Burtenshaw on Twitter for this emotional image of a 95-year-old activist who bravely stood up to Nazi occupation by tearing down a swastika from the Acropolis. Today, he stands alone in the rain, marking the 1973 uprising against’s Greece’s dictatorship. Why is he all alone?

You won’t believe this but here’s the proof courtesy of the BBC.

Speaking to Andrew Marr, the chancellor Philip Hammond reckons “there are no unemployed people”, when asked about the threat to jobs posed by new technology.

I kid you not, that is what he said on air, today, and when Marr asked him to clarify, pointing out the 1.4m unemployed in the UK, Hammond responded people were finding work “at a remarkable rate”.

If you don’t believe me watch it here: http://www.bbc.co.uk/news/av/uk-politics-42042769/philip-hammond-says-there-are-no-unemployed-people

I’ve never liked the cut of this man’s jib (and if you don’t understand that remark then as the MP of the 17th century Jacob Rees-Mogg)!

US Navy all at Sea

What the hell is going on with the American Navy? I ask because yet another US warship has been damaged in a collision with a Japanese tug off central Japan.

The commercial tug lost propulsion and drifted into the guided-missile destroyer, the USS Benfold, during a towing exercise in Sagami Bay. This is just the latest in a series of incidents involving US warships in recent months.”

In August, ten American sailors died when the USS John S McCain and an oil tanker hit each other in waters east of Singapore and in June another seven US sailors died in a collision between the USS Fitzgerald and a container ship in Japanese waters near the port city of Yokosuka.

In May, a guided-missile cruiser and a South Korean fishing vessel collided, while in January another cruiser ran aground near the fleet base in Yokosuka. The US has recently announced a series of reforms aimed at increasing naval skills and alertness at sea.

Well that doesn’t appear to be working too well, does it?