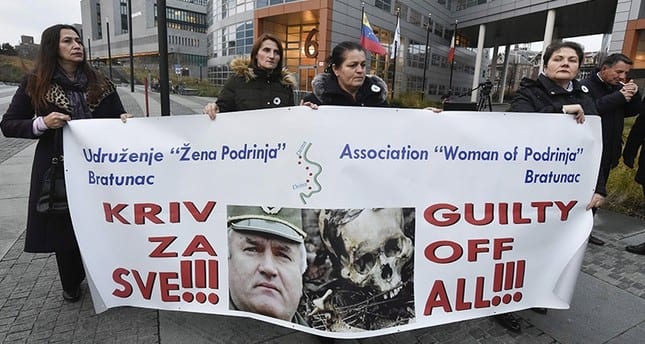 Throughout the trial he was an abusive and disruptive presence in court and on one occasion he made a cut-throat gesture towards the mother of one of the 8,000 victims

Justice has finally been delivered to the so-called Butcher of Bosnia Ratko Mladić who today starts a life sentence behind bars for genocide, war crimes and crimes against humanity.

More than 20 years after the Srebenica Massacre he was found guilty at the United Nations-backed international criminal tribunal for the former Yugoslavia (ICTY) of 10 offences involving extermination, murder and persecution of civilian populations.

Seemingly unrepentant, Mladić swaggered in to the court room at The Hague grinning all round and giving a thumbs up to the cameras which naturally outraged relatives of his victims who turned up to hear sentencing.

He deliberately disrupted the proceedings for more than half an hour when he asked for a bathroom break and then, after he returned, defence lawyers requested that the verdict and proceedings be halted or shortened because of his high blood pressure. The judges denied the request which then prompted Mladić to stand up screaming foul obscenities at the judge and generally shouting to anyone who would listen: “this is all lies.”

His yobbish behaviour saw him forcibly removed from the courtroom while the verdicts were read in his absence. The 74-year-old was chief of staff of Bosnian Serb forces from 1992 until 1996 and it was during the ferocious civil war he carried out the ethnic cleansing against Muslims. He was convicted of ten charges which included one of genocide, five of crimes against humanity and four of violations of the laws or customs of war.

The separate counts related to “ethnic cleansing” operations in Bosnia, sniping and shelling attacks on besieged civilians in Sarajevo, the massacre of Muslim men and boys at Srebrenica and taking UN personnel hostage in an attempt to deter Nato airstrikes.

After a trial lasting 530 days the families finally saw justice being delivered in a case which is probably the most significant war crimes hearing since the Nuremberg Trials after World War Two. Judge Alphons Orie said Mladić’s crimes “rank among the most heinous known to humankind and include genocide and extermination”.

Throughout the trial he was an abusive and disruptive presence in court, heckling and shouting at judges and on one occasion he made a cut-throat gesture towards the mother of one of the 8,000 victims of the 1995 Srebrenica massacre.

The social networks are full of comments from people who believe he should have been executed but, personally speaking, I think death is too swift for his ilk. Nothing would be gained from the death penalty which is uncivilised and it serves no purpose to sink to such levels of primitive behaviour anyway.

At least by being in prison he will have time to reflect on every day that is left in his miserable life about the evil crimes he has committed and the misery he has caused.

I am also eternally grateful this wretched specimen of a man is not a Muslim. No doubt if he was Muslims across the world would be, by now, be urged to condemn him by right-wing fascists and a thousand debates and TV discussions would emerge while secular worthies ask why is Islam so violent.

I’ve no idea what religion Mladić is, as far as I’m concerned it is of no relevance and that’s the way it should be. Perhaps others outside of the Muslim faith might want to reflect on this observation and stop obsessing about Islam in a negative way. There are evil people of varying political stripes and religious ideals in the world today but we should judge them purely on their deeds and actions alone. That is the civilised way of doing things.