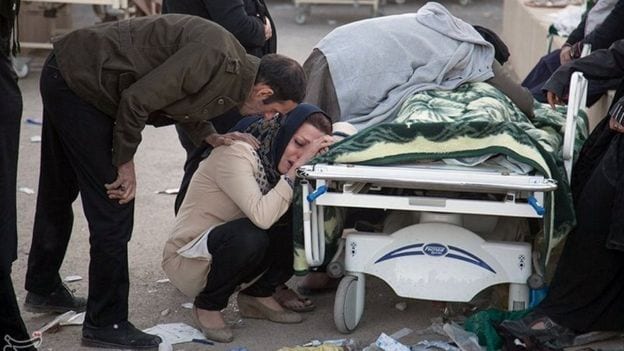 Iran & Iraq hit by Huge earthquake as hundreds die and thousands injured. Watch Live footage below of the quake hitting a shop!

A 7.3-magnitude earthquake has shaken the northern border region between Iran and Iraq, killing at least 343 people and injuring thousands more.

The majority of those who died were in Iran’s western Kermanshah province. Nearly 4,000 were said to be injured.

About 1.8 million people live within 100km (60 miles) of the epicentre, the UN estimates. It occurred at a relatively shallow depth of 23.2 km.

The earthquake hit at 21:18 local time (18:18 GMT) about 30km southwest of Halabja, near the northeastern border with Iran, the US Geological Survey (USGS) said.

Press TV, Iran’s public News Channel said the highest number of casualties in the country occurred in the town of Sarpol-e Zahab, Kermanshah province, with another agency Mehr news agency saying 100 of the 207 reported dead were from that town alone.

In the Kurdish region of northern Iraq, seven deaths were reported. While most of the deaths reported so far have been in Iran, the quake’s epicenter was across the border in Iraq, about 350 kilometers (217 miles) north of Baghdad.

Many homes in the predominantly Kurdish mountainous area are made of mud bricks. As a result, they are at risk of collapse during a significant earthquake like the one that struck on Sunday. Rescue teams were being hampered by landslides. And have asked for civilians not to reenter buildings.

The building of a hospital in Sarpol Zahab town in #Iran #Kurdistan has been destroyed, patients are treated outdoors; death toll of #earthquake raises. #زلزله pic.twitter.com/4D2vbVgM3a

Watch the live footage from a security camera showing the devastating force of the Earthquake. Taken from a small region in Khurdistan. The impact of this earthquake has rocked the whole of the Middle East and citizens of Israel & Pakistan felt the tremors.

The 7.3 magnitude earthquake is one of the largest this year and the initial reports suggest the death toll will rise closer to 1000.

Iran, which sits on a major fault line between the Arabia and Eurasia plates, is no stranger to earthquakes and has experienced deadly quakes in the past.

However the most deadly quake in recent memory occurred in 2003, when a magnitude 6.6 earthquake struck the city of Bam in southeast Iran, killing around 31,000 people.