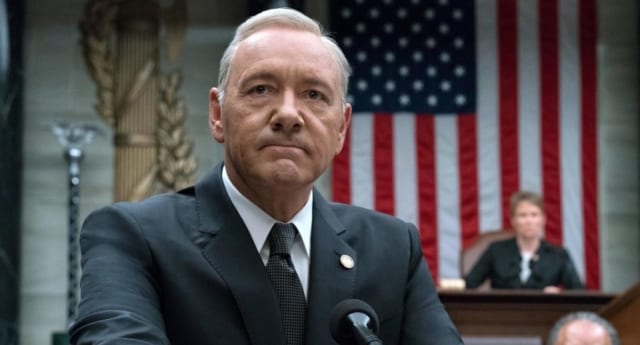 House of cards writers are planning a rewrite on the latest season without the lead actor Kevin Spacey, who was sacked earlier this month, following the sex abuse allegations.

Although, the actor has since checked into rehab, it is unlikely that the humiliated Oscar winner will ever be allowed back into the upper echelons of Hollywood.

The future of the Netflix series remains up in the air unless the writers can create a story line that replaces Frank Underwood, Kevin Spacey’s character in the show.  The show was one of Netflix’s most popular shows before it was cancelled following a string of allegations against star Kevin Spacey that have resulted in his termination from the series and a halt in production of season 6.

The showrunners have final say on the direction and pacing of the season and episodes and are currently toying with a variety of versions, but as yet haven’t finalized a direction.

The decision on whether to proceed with Season 6 after writers find a new direction will rest with Netflix and producer Media Rights Capital, both of which declined to comment for this story.

The cast and crew will know by Thanksgiving what the future holds for ‘House of Cards’. Staff are still being paid during the suspension, but they are in limbo until Netflix and Media Right Capital make an official announcement.