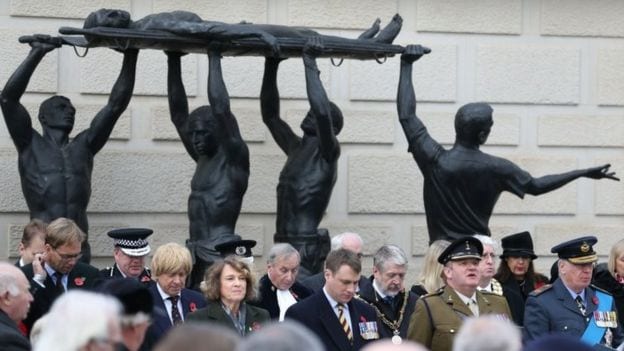 Big Ben strikes after months of silence as the prime minister and the Prince of Wales and the Duchess of Cambridge will be among those at the Royal British Legion’s annual Festival of Remembrance. Armistice Day

Big Ben, which has been silent since August while repair work is carried out, chimed at 11:00 GMT. As Millions of people, Nation wide have honoured the fallen with mark of respect of silence to remember the nation’s war dead, as the UK marks Armistice Day.

Events have been held around the country to mark the 99th anniversary of the end of World War One. The two minutes’ silence marks the declaration of the end of the fighting between Allied Forces and Germany 99 years ago.

This year the event marked the centenaries of women’s service in the regular Armed Forces, the Battle of Passchendaele.

In London, the prime minister and the Prince of Wales and the Duchess of Cambridge will be among those at the Royal British Legion’s annual Festival of Remembrance.

The Queen, Duke of Edinburgh, the Prince of Wales, the Duchess of Cornwall and the Duchess of Cambridge attended the annual Royal Festival of Remembrance at the Royal Albert Hall.

On Sunday, Prince Charles will lay a wreath at the Cenotaph on his mother’s behalf. It will be the first time, as head of state, that the Queen will observe the ceremony from a nearby balcony, where she will be joined by the Duke of Edinburgh.

The change in protocol is seen as an example of the shift of head of state duties from the 91-year-old monarch to the first in line to the throne.

King George V announced that a two-minute silence would be observed in 1919, four days before the first anniversary of Armistice Day. The silence continues to be observed every year on the 11th hour of the 11th day of the 11th month.

Last night the international friendly football game between Germany and England was honoured with players of both teams wearing a poppy armband. A gesture that supporter from both sides respected.