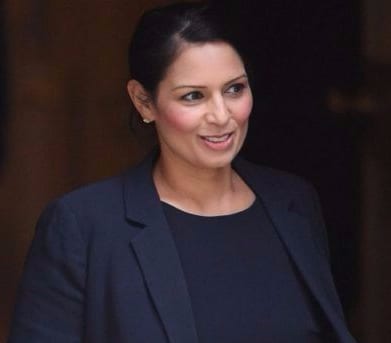 A Rodent in Westminster – How Priti Patel is trying to avoid the sack!

She was formally reprimanded in Downing Street on Monday, where she was asked to give details about a dozen meetings with Israeli officials, which were not sanctioned by the Foreign Office.

The international development secretary apologised for an unauthorised meeting with Israeli PM Benjamin Netanyahu in August, while on a family holiday. Patel, who has been an MP since 2010, is a long-standing supporter of Israel and a former vice-chairman of Conservative Friends of Israel.

But it appears she was not candid about further meetings held in September. On Tuesday it was revealed Ms Patel had not informed the prime minister of her plans to look into giving tax-payers’ money to the Israeli military to treat wounded Syrian refugees in the Golan Heights region – a request that was turned down as “inappropriate” by officials.

On 18 September she met foreign ministry official Yuval Rotem in New York. Ms Patel was forced to correct the record earlier this week about the number of meetings that she had attended and when the Foreign Office had been notified about them.

Great to meet with Priti Patel, UK Secretary of State for International Development, today. A true friend of Israel. pic.twitter.com/8q9qSeX7YZ

A tweet of her family holiday to Israel, but where is her family. No diplomats were present at the meetings, at which the minister was accompanied by an influential pro-Israeli Conservative peer and campaigner, Lord Polak.

The MP said she had been wrong to suggest to the Guardian that Foreign Secretary Boris Johnson knew of the trip in advance when he had only learnt about it while it was under way.

The former deputy leader the conservative Friends of Israel lobby group, has clearly been working towards and agenda, and covering up her secret meetings as catch-ups. The lobby group also plays for MP’s to travel to Israel for holidays, sometimes this is done indirectly and discreetly.

With the latest leak of Paradise papers, it is not difficult to connect to the dots how people in power and influence circumvent the norms to hide and cover any misappropriate dealings.

Priti Patel has been caught with her hand in the ‘cookie jar’ and holding unsanctioned private meetings is against the ministerial code of conduct. And she should be fired for that alone. In the Commons, Labour’s Kate Osamor made that clear as she said it was a “black and white case” of the ministerial code being broken. And she should do the decent thing and resign.

Holding meetings with the aid of a powerful lobby group questions her loyalty and purpose, is she really an MP for her constituents or does she represent some one else.

Wonderful meeting my friend Sec. of State Priti @Patel4witham, a woman of great courage and leadership. We are taking concrete action 1/2 pic.twitter.com/JCXlRhukqW

In a letter to Mrs May, Labour’s shadow Cabinet Office minister Jon Trickett called on the prime minister to either call in her independent adviser on ministerial standards to investigate, or “state publicly and explain your full reasons for why Priti Patel retains your confidence”.