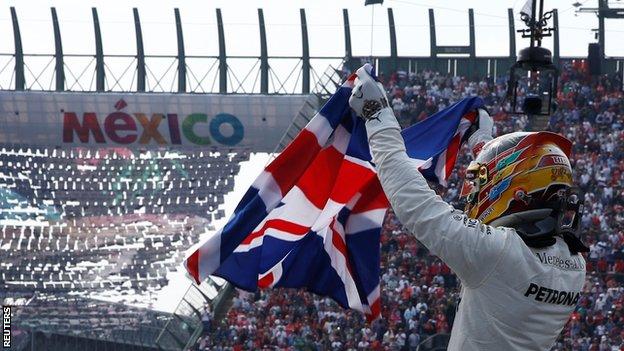 Lewis did the job he had to managed the race and won his fourth title. After an incident ridden race!, some weren’t sure he would make to the end.

Lewis Hamilton clinched his fourth world title at the Mexican Grand Prix despite finishing only ninth after a clash with rival Sebastian Vettel.

Hamilton’s achievement makes him the most successful British Formula 1 driver in history, moving him one championship clear of Sir Jackie Stewart.

After the disappointment of losing the championship to team mate Nico Rosberg last year he has put that behind him and battled through a tough season against a fierce competitor, in Sebastian Vettel.

He now joins an elite group of champions that includes Sebastian Vettel and Frenchman Alain Prost on four world titles, behind only Michael Schumacher, the all-time record holder on seven, and Argentine Juan Manuel Fangio’s five.

Hamilton described the manner of his victory as “horrible”, having being hit by title rival Sebastian Vettel’s Ferrari on the first lap in an incident which also resulted in the German breaking his front wing.

The race didn’t go as he would have dreamt it but he surely won’t mind. Hamilton is the 2017 world champion, allowing him to join Vettel and Frenchman Alain Prost on four world titles.

Hamilton becomes the first driver to win a world championship after being lapped since James Hunt in 1976, another select group he is part of. The first time the 32-year-old had been lapped since the 2013.

The race was won by Red Bull’s Max Verstappen, who claimed the third race win of his career and second in four attempts, after he took the lead at the first corner, a move which led to the collision between Hamilton and Vettel.

Vettel showed his class in defeat as he pulled alongside him and applauded as the crowd rose to their feet to recognise a historic landmark for the sport.

And after the race Vettel said he was “disappointed” to concede the title to Hamilton. “Lewis has done a superb job all year and deserves to win the title,” the German added. “Congratulations to him. It is his day.

He went on to say that “I don’t fear him. I like racing with him. I would have liked a little more this year. Overall they [Mercedes] were better.”

Verstappen completed the race as the winner, with Bottas 2nd and Kimi Raikkonen taking the final podium position. Vettel finished fourth and Lewis eventually finished 9th, one ahead of his old team mate and Fernando Alonso.

The maturity of Lewis has aided him, this season, in the early races Ferrari came out strong, and not everything went his way. And in the years gone by he could have reacted negatively, however he maintained his composure and it paid off. Showing all the hallmarks of multiple world champion.

Lewis may not have won this race in the way that he wanted, he is a like a boxer who prides a victory on how hard he has to work in the fight. But regardless of how he won, the championship was not just over one race and his victories earlier in the year are the ones that helped him clinch his fourth title.

He is without doubt Britain’s greatest every F1 driver and some may argue he is probably the most talented driver in the paddock, But with Seb Vettel and Lewis now equal on 4 championships each, next year will be an epic race off! assuming Ferrari deliver an equally competitive car.

For now at least in the words of Andy Gray ‘Take a bow son!