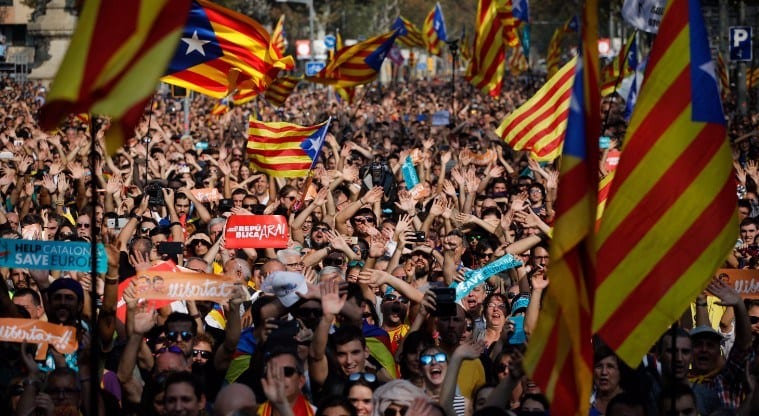 Spanish oppression asserted by an elite firmly in control of power in Catalonia for nearly 40 years, the spin that Pro independents spin

At least three Hundreds thousand people took to the streets of the Catalan capital of Barcelona on Sunday after Madrid took unprecedented measures to quash the region’s bid to split from Spain in anti-independence protests.

The protesters say they are the so-called “silent majority” who don’t support Catalonia’s independence bid.

While supporters of the secessionist movement worry it is losing its momentum, some of these pro-union protesters were demanding the arrest of deposed Catalan leader Carles Puigdemont.

In a sea of red-and-yellow Spanish and Catalan flags, protesters marched down Barcelona’s Passeig de Gràcia shopping strip, some chanting for the imprisonment of deposed Catalan leader Carles Puigdemont, who led the divisive independence drive.

Puigdemont has urged his supporters to pursue “democratic opposition” to the moves by Madrid, which have included dissolving the region’s government and calling snap elections for December 21.

Contrary to widespread assumptions, the measures requested by Spanish Prime Minister Mariano Rajoy do not amount to a full suspension of autonomy, which would eliminate the Generalitat (the Catalan executive body, restored prior to the entry into force of the 1978 Constitution) and the Catalan Parliament.

Spain is set to put in place measures to take direct control of Catalonia in response to the region’s declaration of independence last week.

On Friday, Madrid stripped Catalonia of its autonomy and removed Catalan leader Carles Puigdemont from office. The temporary move will see as many as 150 of the region’s ministers replaced. Some have vowed to continue to work.

It was unclear on Sunday what that opposition would mean in practice. The sacked head of the Catalan police force urged officers to follow the orders of the new commanders, but there were signs that some civil servants would refuse to obey Madrid.

Mr Puigdemont and other Catalan officials may face criminal charges, a move likely to lead to huge protests.

The secessionist movement has deeply divided Catalonia, one of Spain’s wealthiest regions.

Opposition lawmakers boycotted the independence vote in the Catalan Parliament. And in the past month, tens of thousands of people have protested in rallies, both in favour and against independence.

Mr Puigdemont and his vice-president Oriol Junqueras have said they do not accept the move by Madrid, adding that they could only be removed from power by the citizens of Catalonia.

If Mr Puigdemont and others refuse to step aside, they face possible arrest. Attention is now focused on the headquarters of the Catalan government to see if Mr Puigdemont turns up for work.

About 200,000 civil servants are due to arrive on Monday, but it is not clear how many will stay away or refuse to follow instructions. A tense few weeks lie ahead for the Spanish authorities and the Catalans. Stay updated as this story unfolds on a daily basis.