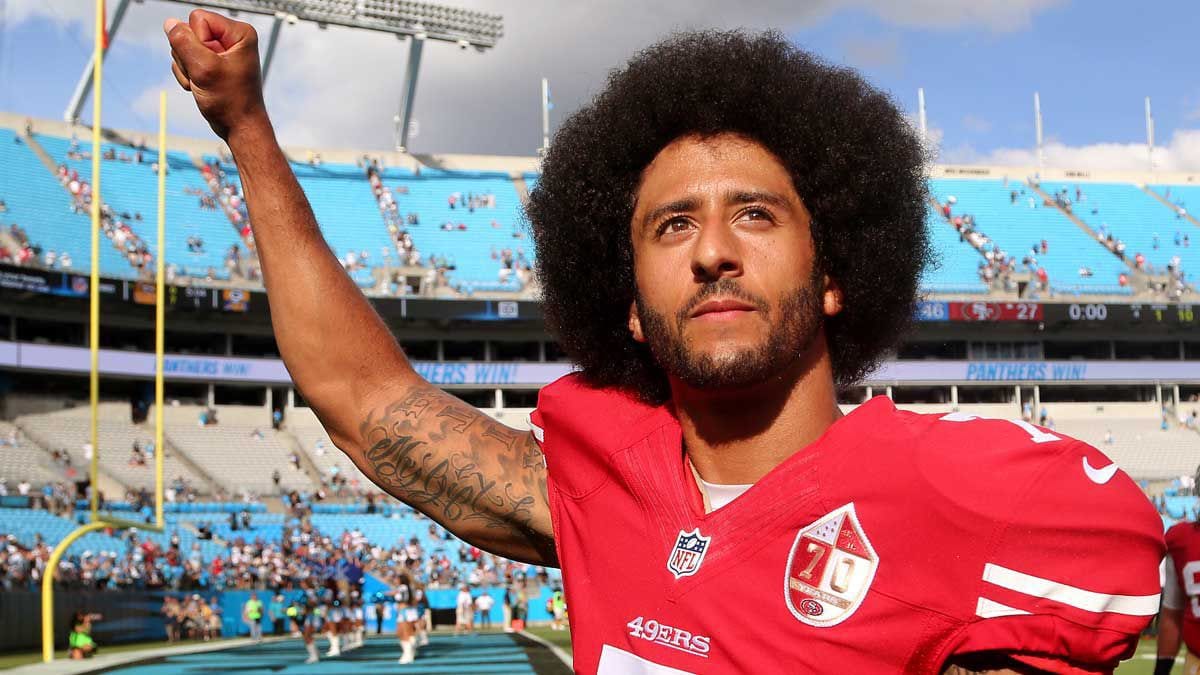 The former NFL San Francisco 49ers quarterback is now a free agent after he rose to national prominence last fall when he refused to stand for the national anthem to protest police brutality. Eminem previously expressed his support for Kaepernick in “Campaign Speech.”

Collin Kaepernick’s kneeling during the national anthem in protest of racial injustice before a 2016 pre-season game created the impetus for Trump’s criticism of NFL players at a rally last month.

Trump told supporters last month that owners should fire players who kneel during the anthem, reigniting the movement started by ex-San Francisco quarterback Colin Kaepernick over his view of police mistreatment of black males.

The NFL quarterback Colin Kaepernick first protested against racial injustice and police brutality by kneeling down during the United States national anthem in the summer of 2016. Since then, a whole movement has grown around that gesture.

Kaepernick’s protest followed the aftermath of Alton Sterling’s death in Reid’s hometown of Baton Rouge, Louisiana. And #TakingtheKnee was about symbolising the police brutality, systemic oppression of black and brown people and not about the anthem the flag or the military.

But while Kaepernick has been ostracised, shunned and relentlessly booed on the football field, in hip-hop there seems to be nothing but love for the former 49ers quarterback.

But President Trump won’t give up, he has remained defiant in his feud with athletes who take a knee during the National Anthem, insisting that NFL owners should fire players who engage in this protest.

The #BlackLivesMatter movement and social media campaign, took a new turn last night when Eminem weighed in with an attack directed to Donald Trump  when Eminem unleashed a four-and-a-half minute lyrical tirade against President Donald Trump, saying he “came to stomp.”

The former San Francisco 49ers star had been mentioned in hip-hop lyrics before, some of the most memorable mentions came over the past year as artists rallied behind his message.

Hip-hop artists like Jay-Z and J. Cole have been vocal about their support for Kaepernick -who has not been signed by an NFL team this year and several artists, including Eminem and Kendrick Lamar, have referenced him in their lyrics.

Black Lives Matter (BLM) is an international activist movement, originating in the African-American community, created in 2012 is at the forefront of racial justice and has a popular following on social media. And Kaepernick, despite still being without a contract, recently made a $25,000 donation to the cause. And has publicly pledged to give $1 million from his jersey sales to “organisations working in oppressed communities.”