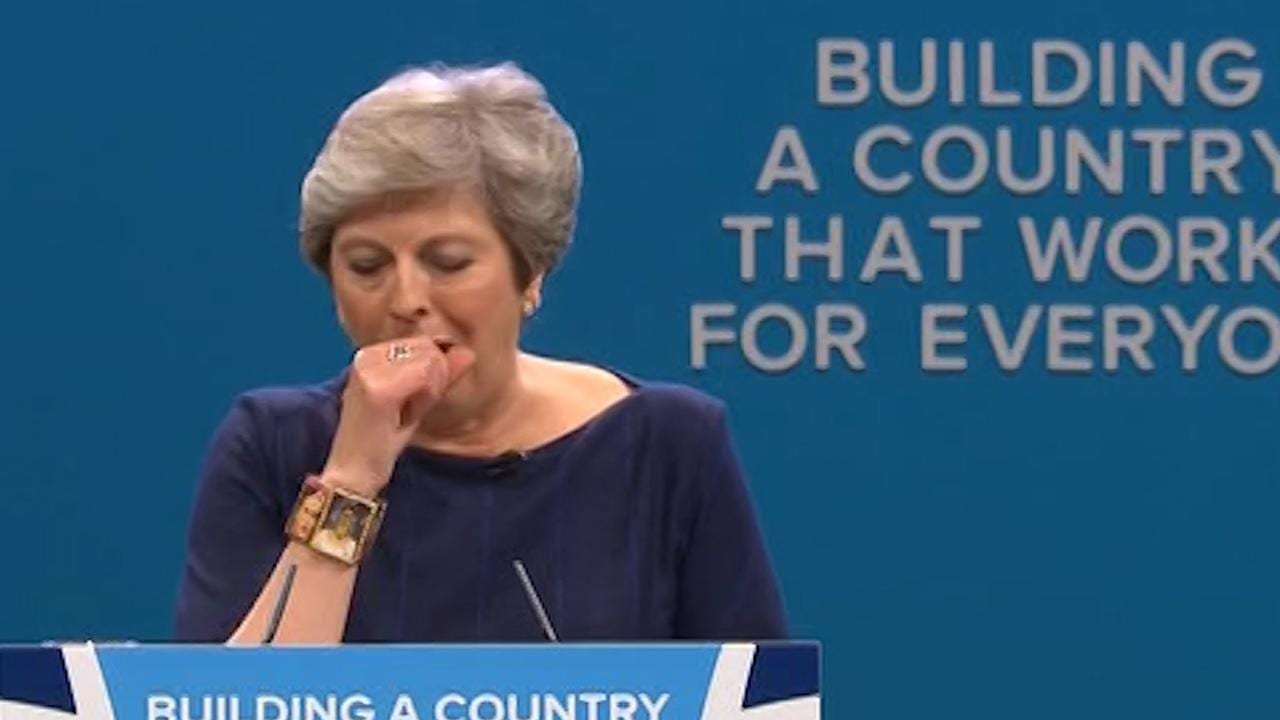 So Theresa May’s perfectly planned conference speech didn’t happen. While most of her audience focused on her prolonged coughing fit and the moment a so-called comedian handed her a P45 (poor taste and poor timing) I was trying to make sense of the content of her speech.

In the grand scheme of things the speech wasn’t that important but what it did reveal was much, much more about the state of the Tories than a few letters falling off the party slogan behind her.

By the way, I’m more of a cock up than conspiracy person but having watched, over the years, the agonisingly meticulous planning that goes in to Conservative Party Conferences, I find it almost beyond belief that some bit part comedian could get within striking distance of the PM and also watched, with more incredulity, at the lettering falling from the Tory slogan. These things simply don’t happen at perfectly planned events. Dirty tricks and dark forces at play? Who knows and, frankly, I couldn’t give a flying fig!

So let’s get back to May’s speech which was not her finest, nor was it her most important but it did reveal Jeremy Corbyn has the Tories rattled. Her speech was a pale imitation of what Corbyn and John McDonnell, the shadow chancellor, had promised at their conference days earlier. Labour promised to abolish university tuition fees while May offered a paltry freezing of fees. (Neither actually impressive when you consider Scottish students are tuition-free under the SNP Government).

Corbyn promised to build more home and so did May. He promised to deliver a more caring society, free from injustices and so did May. The Prime Minister talked about victims of injustice and tried to convince us that the Tory Party under her leadership cares about the likes of the Hillsborough families, for the victims of sexual abuse, for the victims of the Grenfell Tower fire, for victims of racial discrimination by the police or those trapped inside the matrix of the mental-health system. And then she said: “This is what I’m in this for.”

Those of us with long memories can remember very well the Tory Party of 40 years ago when May joined. It was during the Thatcher Years when the ‘Blessed Margaret’ clenched her iron fist as injustice was unleashed upon the Hillsborough families to the Miners’ Strike, the destruction of heavy industries which laid waste to entire communities as well as the inner city riots.

In essence May said she wanted to give a voice to the voiceless … no wonder she was choking. Those of us listening were also gagging in disbelief at this rewriting of political history and the onset of political amnesia by the PM. This was more Jackanory than House of Cards.

So by the time she got around to talking about Brexit it was quite clear May thinks the electorate are little better than sheep … pity those in the ranks of her own party aren’t as compliant. The phrase “trying to herd cats” sprang to mind after the treachery and back-stabbing shenanigans of May’s cabinet began to play out before, during and after Manchester.

This was most definitely not May’s finest hour nor was it her finest speech and the latter had nothing to do with coughs, stammers, splutters or the pathetic bit part role of a wannabe comedian. The content was a faint echo of Labour’s conference with some lip gloss plastered over the Thatcher Years for good measure.