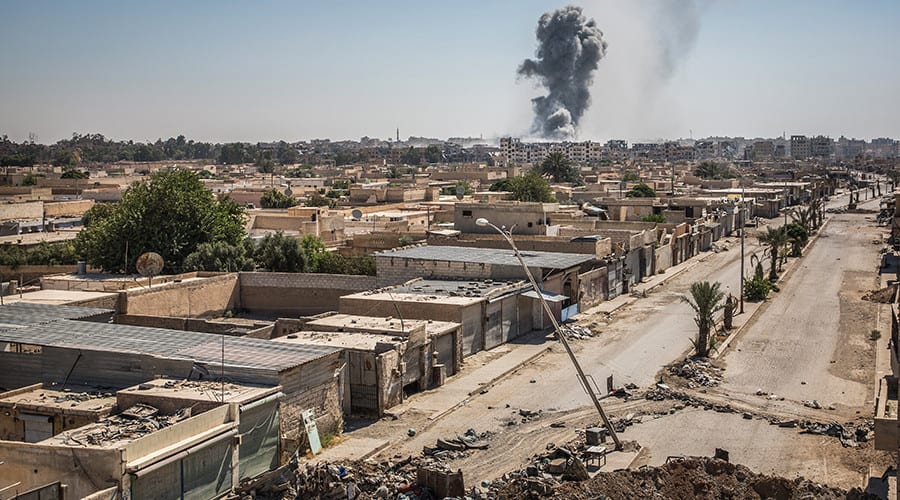 An independent agency says 4,354 civilians killed in the bombing campaign by the US-led coalition since June 2014.

Civilians are paying an “unacceptable” price in the war against ISIS, The US-led coalition is under-reporting the civilian casualty figures in Syria, the deputy director of terrorism and counter-terrorism division at Human Rights Watch (HRW), criticising the US’s secretive and insufficient self-investigation methods.

The USA has carried out an internal investigation and claims that there was “insufficient evidence” of civilian casualties during the strikes.

Fighting Islamic State in Syria is a tough business, made up of many parties. But an airstrike by the US killed at least 84 civilians, including 30 children, when it carried out two lethal airstrikes near Raqqa in March. The US-led coalition, however, insists that there was no civilians present at the time of the attacks.

This investigation comes after the US-backed forces in Syria said Saturday they were launching an offensive against ISIS in the eastern city of Deir Ezzor. Which is arguably more important to ISIS than Raqqa because it sits at the heart of Syria’s oilfields.

The Syrian Democratic Forces, an alliance of mostly Kurdish and some Arab militias, said the push is designed to force the terror movement from eastern parts of the city, the largest in eastern Syria and one of the largest in the country. ISIS still holds much of Deir Ezzor. It is home to about 90,000 civilians (though many have fled), and controls territory to the south of the Euphrates. But the group is quickly running out of fighters, supplies and escape routes.

In two of the attacks in Tabqa and Mansourah, a US-led coalition aircraft struck a school housing displaced people in Mansourah in March, and a market and a bakery in Tabqa HRW said. In its 42-page case study, the HRW added that ISIS terrorists were present at both sites, along with a number of civilians.

While acknowledging the terrorist presence at the US-led coalition target sites, the director pointed out that US-led coalition is still under an “obligation” to protect civilian lives in a combat zone.

Coalition airstrikes on Raqqa, an Islamic State stronghold in Syria, have claimed many civilian lives and forced tens of thousands to flee. The besieged city has come under heavy air bombardment while civilians are trapped in IS-occupied neighbourhoods.

Last month, the US-led Coalition has released a new assessment of civilian casualties from its airstrikes, claiming 624 people were “unintentionally killed” since the start of the campaign against Islamic State in 2014.

However, The data collected by the group Airwars, ( a UK based airstrikes monitoring company) indicates a far larger death toll than the official figures, with 4,354 civilians killed in the bombing campaign by the US-led coalition since June 2014.

According to the UN, over 8,000 civilians have been killed or wounded in Mosul alone, with the city almost levelled to the ground during the operation. The siege for Raqqa and Deir Ezzor is just as intense, perhaps even more important because of the oil fields.

The US-led coalition has said that despite the fact that it takes “extraordinary” efforts to avoid collateral damage, “in some incidents casualties are unavoidable.”

Meanwhile, The humanitarian situation in the cities like Raqqa, is dire, as the remaining people trapped there have virtually no access to basic services, including clean water and food.