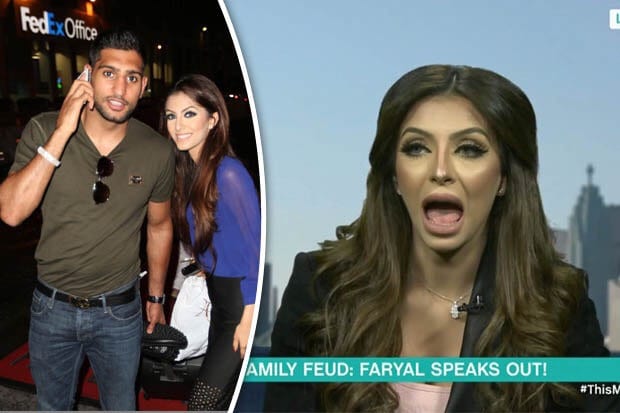 Amir khan the British boxer has reportedly split from his wife, Faryal Makhdoom. The couple exploded on twitter earlier and have been trading insults ever since.

Amir Khan has accused Faryal of being a ‘gold digger’ and blames the breakdown of their marriage of her infidelity with British heavy weight champion Anthony Joshua. So far no comment or denial from Faryal has appeared.

This is not the first time the family have publicly ranted on twitter. Earlier last year Faryal tweeted messages on twitter about Amir Khans family who she accused of being suppressive and backwards. At that time she went to extreme lengths to discredit the boxers brother and his family, sharing nude pictures and posting shaming tweets towards Amir Khans parents.

The Bolton based boxing champion married Faryal from relative obscurity. And Faryal has since developed an social media blogger / vlogger and using Amir khans fan base to promote her makeup tips. She has since become a social media celebrity and has created a following.

Various rumours are surfacing about their problems but below are excerpts from their twitter rant earlier today. Faryal has been known for her vicious attacks on social media and as the old adage goes ‘ he’ll hath no fury, as a woman scorned’.

Stay Tuned for more as it breaks. Over a hundred tweets in one hour… the rant continues.