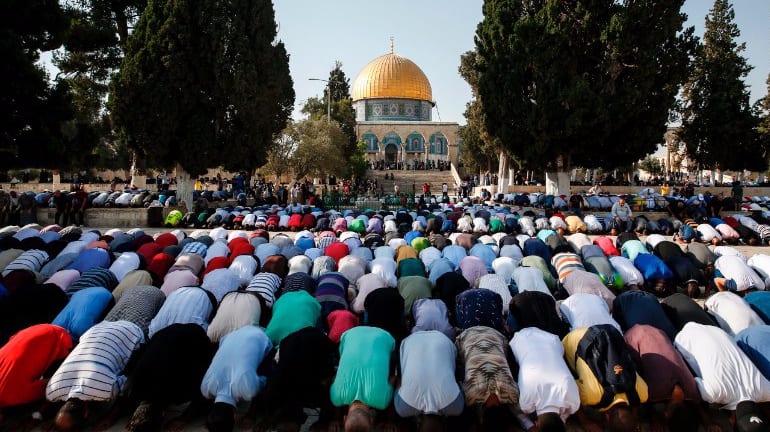 The mosque compound is known to Muslims as “al-Haram al-Sharif” while Jews call it, “Temple Mount”.

Israeli police added extra security and imposed age restrictions on Muslim worshipers, on who were allowed into the holy site, but had to remove some of teh surveliance equipment they had installed in the past 10 days. However, Jumma prayer on Friday, passed in relative calm as it does every week.

Friday prayers at Al-Aqsa Mosque passed relatively peacefully, defying expectations of widespread demonstrations and potentially violent clashes around the Old City. Some demonstrations did take place and others protested by praying outside the Gate of the Mosque. Where Christians stood in solidarity with Muslims in protest and outrage of the Israeli actions.

Al Aqsa Mosque is the third place for Muslim worshipers, after Mecca and Madinah, In Saudi Arabia. Any issue surrounding the Al Aqsa Mosque, is and always will be a sensitive issue for Muslims and Jews alike whom refer to the Mosque as ‘Temple Mount’.

Critics have commentated that Israel should respect the sanctity of this site and not exacerbate tensions between the Palestinians and Israelis by enforcing themselves on such a sensitive place. As this has unfolded it is demonstrated that Palestinians primarily want to be able to pray in peace at Al Aqsa, in Palestine.

However, following clashes on the 17th of July the Israeli forces shut the compound down and installed additional monitoring equipment. The site was shut down during Friday prayers, which is the most significant weekly prayer for a Muslim, after five people were killed in a gunfight. This is the first time the compound has been closed for prayers in 48 years.

Israeli authorities responded by installing security cameras and metal detectors. The decision to install the measures, seen as a unilateral step by Israel, angered the Muslim community in Jerusalem and the region. Israeli Prime Minister Benjamin Netanyahu announced the additional security measures on Saturday, saying they gave Israel “almost complete control over what goes on” in the compound, to prevent future attacks.

Muslim religious authorities, who administer the compound, are refusing to pray there on Sunday after Israeli authorities installed metal detectors and additional closed-circuit television cameras.

Following days of deliberations, Israel removed the extra security measures. Some people believe, that they have only removed a certain percentage and maintained enough surveillance equipment to monitor the activities within the compound.

The move was supposed to defuse the tension in Jerusalem and quiet a growing diplomatic rift with Jordan, which has custodianship of the holy site.

Tensions in the streets of Jerusalem remain high, with occasional confrontations between Muslim worshipers and Israeli police erupting Thursday, when worshipers agreed to enter the site for the first time in two weeks after the removal of the security measures. But delays in opening at least one of the gates to the al-Aqsa compound devolved into a confrontation clashes.

The demonstration continued for hours, with chants of “Allahu Akbar” — Allah is the greatest — but eventually both groups of police and demonstrators dwindled. The Palestinian Red Crescent reported four people were injured.

This clash had the potential of escalating worldwide, Muslim clerics and leaders from around the globe described the sanctity of Al Aqsa as crucial. Turkeys Prime Minister Erdogen publicly outraged by this action, as was were Saudi Princes posting on social media.

The mosque compound is known to Muslims as “al-Haram al-Sharif” while Jews call it, “Temple Mount”.