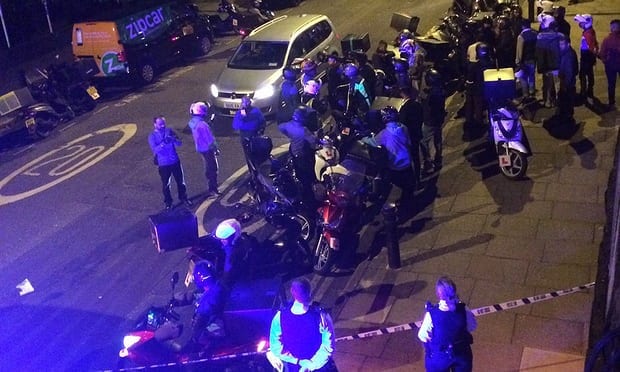 A teenager has been arrested after acid was thrown in people’s faces in five attacks over one night in London.

Two moped riders attacked the victims over 90 minutes in Islington, Stoke Newington and Hackney on Thursday.

Police said the attackers pulled up to five people and doused them with corrosive liquid in five separate attacks between 10.25pm and 11.37pm.  The acid attacks were carried out by two male suspects and involved the theft of two mopeds, police said

The attacks began when a 32-year-old moped rider was approached by the two male suspects as he rode on the Hackney Road junction with Queensbridge Road.

The pair tossed the noxious substance into his face before one of them jumped on to his vehicle and drove away. Police said the man had gone to an east London hospital and they were awaiting an update on his injuries.

An eyewitness said he heard a victim, who he believed was a delivery driver, “screaming in pain”. One victim suffered “life-changing injuries”.

Little more than 20 minutes later, at about 10.50pm, the pair sprayed another victim with searing liquid on the Upper Street junction with Highbury Corner in Islington. The victim was taken to hospital in north London.

At about 11.05pm, a further victim was attacked by two men on a moped on Shoreditch High Street, having liquid thrown in his face. His injuries were not life-threatening, police said.

Within 15 minutes the attackers appear to have struck again, launching the corrosive substance at a man on Cazenove Road, causing “life-changing” injuries.

The final assault of the night was reported to police at 11.37pm, when another man was confronted as he sat on his moped in traffic on Chatsworth Road. After again spraying the liquid in a victim’s face, the moped was stolen and both attackers fled.

“The acid can cause horrendous injuries,” she said.

“The ones last night involved a series of robberies we believe are linked – I am glad to see we have arrested somebody.”

Assaults involving corrosive substances have more than doubled in England since 2012, with the number of acid attacks in the capital showing the most dramatic rise in recent years.

So far this year – excluding Thursday night – the Met has recorded 119 such attacks.