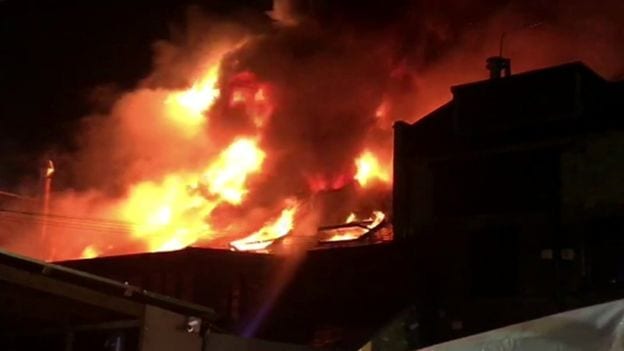 A huge blaze broke out overnight at the world famous Camden Lock Market in North London. The buzzing market place lay ablaze during the twilight hours of Monday morning, with flames smoke blazing through the local Marketplace.

Seventy firefighters and 10 fire engines were sent to the site, which is a popular tourist attraction, London Fire Brigade said. A fire officer at the scene said the fire began in a building containing a number of businesses.

The market, which has been based in the area since 1974, has more than 1,000 stalls and shops. The fire affected a small section of the area and many stalls and shops were “operating and welcoming visitors and customers as usual”, the market said.

London Ambulance Service was called in but confirmed it had not treated any patients. Major fires have hit the sprawling market area twice before in recent years, in 2008 and 2014.

The market, which has been based in the area since 1974, has more than 1,000 stalls and shops. Camden Market officials have said that the blaze has only affected a small portion of the market and with the quick response by the firefighters, some shops are trading as usual.

Although the official cause of the blaze is unknown, it is suspected to have started from a local takeaway shop. So far no one has been hurt. This is the second large-scale fire to hit London, with Glenfell Tower tragically taken the lives of hundreds of Londoners.

Around 35 firefighters worked hard to stop this terrace house fire in #Peckham from spreading to neighbouring homes https://t.co/fbNNMsxYxV pic.twitter.com/BbWgBBXRSJ