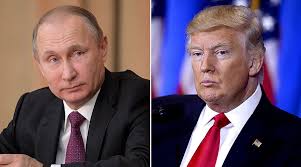 Meeting of the presidents; Trump & Putin to meet on Friday

President Donald Trump will hold an official bilateral meeting with Russian President Vladimir Putin this Friday on the sidelines of G20 summit in Hamburg, Germany.

According to a spokesperson for the White House, the Trump-Putin meeting will be a “normal bilateral meeting.”

The White House has not released details on what Trump will discuss with his Russian counterpart. key discussions will inevitably involve The future of Syria after the impending fall of ISIS and how to prevent American and Russian forces active in the country from crashing, and willingness of the US to stand by NATO allies are all in the balance. A spokesman for the Kremlin, told reporters that it will be a “full-fledged, seated” bilateral meeting.

“It’s really going to be whatever the president wants to talk about,” McMaster said. Both men are well-known for using their swagger at public appearances to intimidate opponents and project an image of strength, aware of the key role of body language in creating a political narrative.

The Kremlin released a statement Monday in which it said Putin will demand the return of two diplomatic compounds seized by the United States — sanctions placed on Russia by former President Obama in 2016 following Russia’s interference in the U.S. presidential election.

Trump and Putin have spoken over the phone three times since Trump took office, but this is the first face-to-face meeting between them. Putin, a former KGB officer who has put a bid to reassert Russian influence at the West’s expense at the center of his foreign policy, has described Trump as “bright and talented” but warned that America is in the grip of political “schizophrenia” over allegations that Trump had shared top secret information with visiting Russian officials.