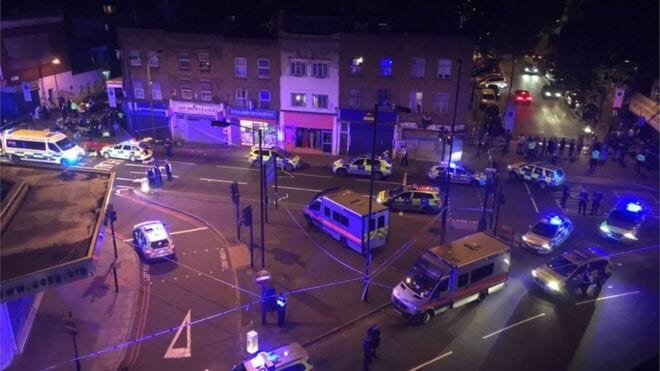 The Backlash for not making the muslims feel at home

A man has died and 10 people have been injured after a man drove a van into worshippers near a north London mosque.The van mounted the pavement and struck a group of people just after midnight BST near Finsbury Park Mosque in Seven Sisters Road. A 48-year-old man has been arrested.

Prime Minister Theresa May said police were treating it “as a potential terrorist attack”. And will chair a meeting on this later this morning.

Eyewitness Abdul Rahman said the driver said he wanted to “kill all Muslims”. “When the guy came out from his van he wanted to escape, run away and he was saying ‘I want to kill Muslims. ‘I want to kill Muslims.’ Trying to restrain him the victim said “I hit him on his stomach… and then me and the other guys… we held him to the ground until he couldn’t move. We stopped him until the police came.”

The Muslim Council of Britain has raised concerns over the security of the community in the wake of the event and have issued statements about the backlash following the previous attack in London Bridge.

Harun Khan, secretary general of the Muslim Council of Britain said: “Over the past weeks and months, Muslims have endured many incidents of Islamophobia, and this is the most violent manifestation to date.

“We expect the authorities to increase security outside mosques as a matter of urgency.” Many of the victims are believed to have just left evening prayers at the Muslim Welfare House after breaking the Ramadan fast. The MCB said it was a “violent manifestation of Islamophobia” and called for extra security around mosques.

So that’s what happened – what is happening now

So recently we have seen the best and worst in humans, destructive individuals and generous communities. Manchester, London Bridge and the tower inferno in Kensington are all examples of where all these attributes have been witnessed. And following the events in Manchester and London Bridge there were calls for Muslim Imams and community leaders to do more. To distance them selves and the British Muslims from the terrorists. This has been a theme that has irrated the Muslim community for many years and now since the attack in Finsbury, there has been a backlash to treat the terrorist with the same verve.

Call it for what it is a terrorist who calls for the hatred and murder of muslims. The media have also been seen as part of the same ‘conspiracy’. Osborne also appears to have a Twitter account, which he has never used to send his own tweets, instead monitoring 32 other users, including Paul Golding and Jayda Fransen, the leaders of the far right party Britain First. Its mission statement states: “We will restore Christianity as the bedrock and foundation of our national life as it has been for the last one thousand years.”

Surely, this incitement calls for the far right in this country and Europe to be monitored with the same diligence that the authorities do the muslims. Otherwise we could ostracise a community we are encouraging to stand with us.