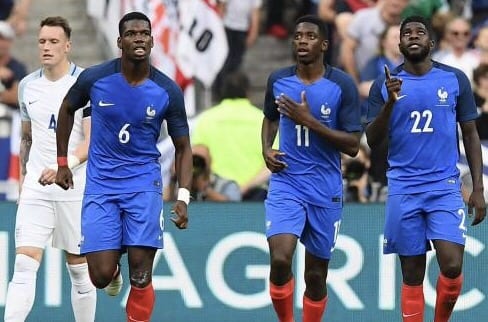 England’s final game of the season ended in defeat as they were deservedly beaten by an inspired French team, who played the with ten men, in an entertaining friendly in Paris.

Harry Kane provided England with the perfect start when he turned in Ryan Bertrand’s cross after only nine minutes, but the pace and movement of the French teams attack was soon proved too much for the three-man defence.

Burnley goalkeeper Tom Heaton, who played for 45 minutes before being replaced by Stoke City’s Jack Butland, managed to keep out efforts from Olivier Giroud and Ousmane Dembele, only for first Samuel Umtiti and then Djibril Sidibe to pounce and put the hosts ahead at the break.

England were level after 48 minutes when Kane scored from the penalty spot following a trip between Raphael Varane and Dele Alli who was clear in on goal. Which required the intervention of the video assistant referee Marco Guido. He confirmed the referee original decision to award the spot-kick, resulting in the sending off of Varane, much to the disgust of the France players and the home crowd.

France, inspired by Paul Pogba, Dembele and 18-year-old Monaco striker Kylian Mbappe tormented the England’s defence with pace and power and quick transition from defence to attack. It was no surprise when their winner came 12 minutes from time -and fittingly it was Mbappe who set up Dembele for a powerful, low finish.

It was a night which began in inspiring fashion, with the crowd singing the Oasis hit Don’t Look Back In Anger and France fans joining England supporters in singing the national anthem and the players in with arms locked, in memory of those who died in the recent Manchester and London attacks.