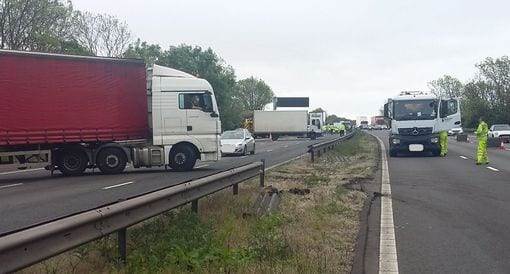 Five people have been killed in a collision involving a lorry and a car on the M6 in Staffordshire. Southbound carriageway expected to be closed for some time, police say, after 4.30 am a collision between lorry and car.

Four females and a male, all believed to be adults, in a Nissan Micra died in the crash between junction 15 for Stoke-on-Trent and 14 for Stafford. The lorry driver, a 60-year-old West Midlands man, has been arrested on suspicion of causing death by dangerous driving.

A sixth person is serious but stable following the southbound crash.  It said recovery and clean-up work had been completed. The lorry driver was uninjured in the collision.

The stretch of motorway was shut after the crash at about 04:30 BST, before reopening around lunchtime. There were still long delays back to junction 16 at about 12:30, Highways England said. A detailed investigation into the collision had begun.

Drivers spent more than four hours driving just over five miles. This stretch of the M6 is notorious for fatalities.

My Tweets
We use cookies to help identify your computer so we can tailor your user experience, track shopping basket contents and remember where you are in the order process. WTX News Our Cookie Policy
Europa League Final: Ajax v Manchester United
United win The Europa League to clinch the champions league position
To Top
Weekly