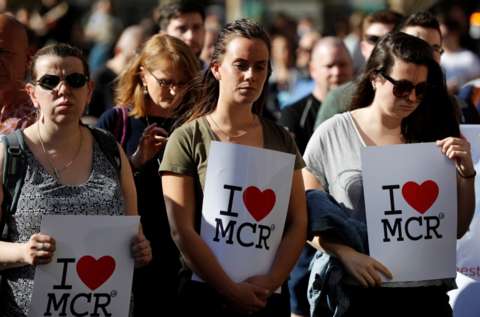 Salman Abedi has been named by police as the suspected suicide bomber who killed 22 people and injured 59 at Manchester Arena on Monday night. Abedi, who had at least three siblings, had lived at several addresses in Manchester, including a property at Elsmore Road, Fallowfield, which was earlier raided by police.

So far three victims have been named – Saffie Rose Roussos, eight, Georgina Callander and John Atkinson, 28. GM Police said the priority was to establish whether Abedi had worked alone or not. Abedi is thought to have blown himself up in the arena’s foyer shortly after 22:30 BST on Monday, as fans were beginning to leave a concert by US singer Ariana Grande.

The wounded are being treated at eight hospitals around the city, with 12 children under the age of 16 among them.

It is the worst terrorist attack in the UK since the 7 July bombings in 2005, in which 52 people were killed by four suicide bombers.