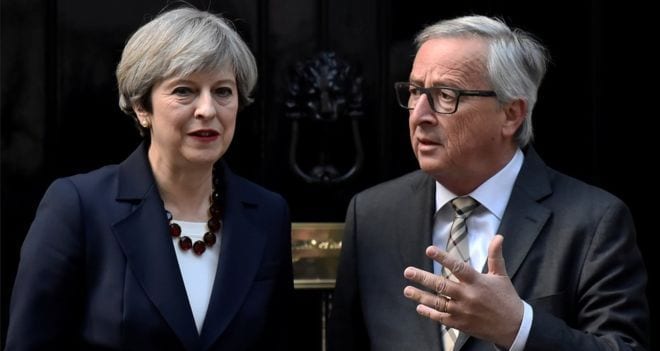 The ferocity of the speech stunned Westminster and sent shockwaves all the way to Brussels where senior figures remained tight-lipped in the wake of the attack, while domestic rivals accused Ms May of irresponsible electioneering and mimicking Donald Trump in “winding up” scraps with foreign leaders.

She emerged from No 10 to say: “In the last few days, we have seen just how tough these talks are likely to be.

“Britain’s negotiating position in Europe has been misrepresented in the continental press. The European Commission’s negotiating stance has hardened. Threats against Britain have been issued by European politicians and officials.

“All of these acts have been deliberately timed to affect the result of the general election that will take place on 8 June.”

Despite the Conservatives’ commanding poll lead, the prime minister raised the spectre of a hung parliament, and suggested only by voting for “my team”, could the British public ensure Brexit would be a success.

Government sources said the prime minister and her close colleagues, including foreign secretary Boris Johnson, had been genuinely angered by the leaks, thought to come from allies of Mr Juncker – but they also believe striking a combative pose will play well with eurosceptic voters.

Reports have emerged that the EU is preparing to demand a payment of up to €100bn (£84.5bn), up from a previously estimated €60bn, due to new stricter demands are driven by France and Germany.

Opposition parties warned taking such a hard line with Britain’s EU partners for short-term electoral gain risked souring the crucial talks, which are set to begin in earnest once the general election is out of the way.

Her intervention came as Britons prepare to vote in local elections, with councils across Scotland, Wales and many parts of England up for grabs in a poll the Tories hope will point to a swing of support towards them that will be replicated on 8 June.