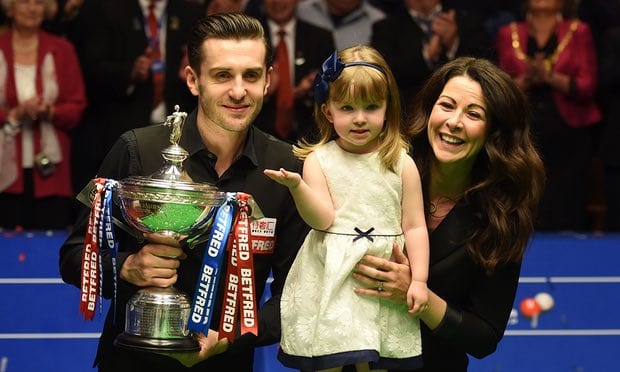 The world number one is only the fourth player after Steve Davis, Stephen Hendry and Ronnie O’Sullivan to claim back-to-back titles in the modern era.

Mark Selby defended his World Championship title with a stunning comeback to beat John Higgins 18-15 and secure his third crown in four years.

A dreadful collapse for Higgins means having come through a comfortable semi-final against Barry Hawkins, he was initially at ease against Selby, stroking in a 141 break which equalled O’Sullivan’s effort in 2012 as the best break recorded in a World Championship final.

And Selby was out of sorts during Sunday’s play at the Crucible, missing straightforward opportunities in the reds to hand his opponent the initiative.

But the 33-year-old, who was named ‘The Torturer’ by Ronnie O’Sullivan for his gritty victory in 2014 from 10-5 behind, showed similar uncompromising characteristics with a ruthless display.

In the final session, the pre-match favourite made breaks of 71, 70 and a 131 clearance following the contentious call in the 31st frame.

Watch highlights of the game via the BBC Sport website.

The story in pictures 📷

Backstage fun at Eurosport waiting for our food!! Watching a great final pic.twitter.com/wbgw1YuIMv

Back on soon for the mid session on Eurosport. We're all loving this match pic.twitter.com/JPXOB0x9Vg

If you want to win events you need to play like selby. It's the new modern way of playing..#lethalsnooker