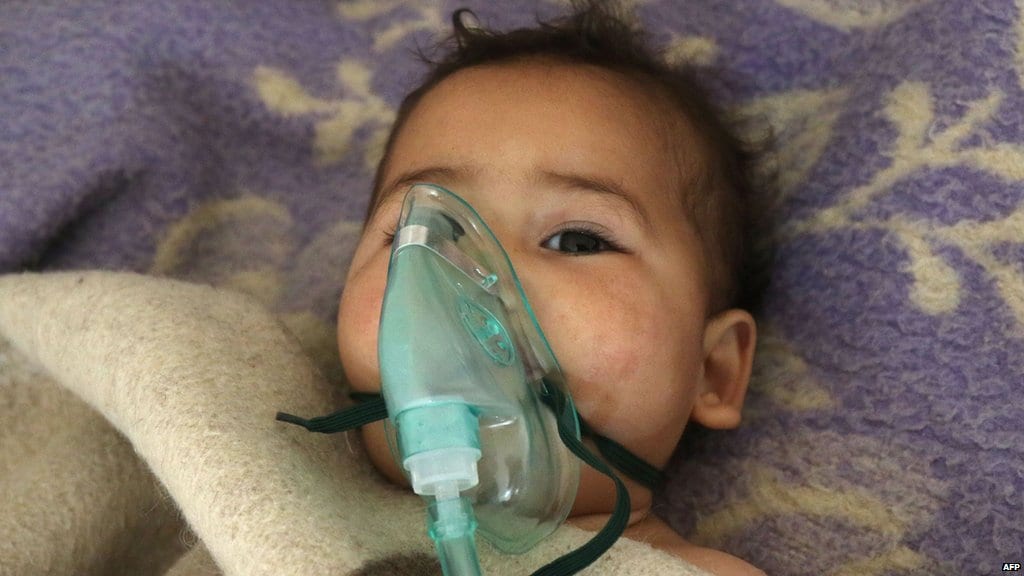 Syria’s President Bashar-al Assad says reports of a chemical attack by his forces were “100% fabrication”. More than 80 people were killed in the rebel-held town of Khan Sheikhoun on 4 April, and hundreds suffered symptoms consistent with a nerve agent.

In an exclusive video interview with Agence France-Presse, he said “there was no order to make any attack”. Mr Assad told the AFP news agency that the Syrian government had given up its arsenal of chemical weapons in 2013, adding “even if we have them, we wouldn’t use them”.

Witnesses said they saw warplanes attack the town but Russia says a rebel depot of chemical munitions was hit.

Shocking footage showed victims – many of them children – convulsing and foaming at the mouth.

Sufferers were taken to hospitals across the border in Turkey, which opposes Mr Assad. Turkey has since said it has “concrete evidence” that the nerve agent Sarin was used.

The United States on Friday blasted 59 Tomahawk missiles at the Shayrat air base near Homs, which the Pentagon said Assad’s jets had used to launch a deadly chemical attack on rebel-held Idlib province.

The public assessment of Friday’s missile strike and the forceful rhetoric came as G7 ministers met in Italy to send a “clear and coordinated” message to Russia over its support for Damascus.

The annual two-day meeting had initially been expected to focus on talks with Tillerson about hotspots like Libya, Iran and Ukraine. But the agenda will be dominated by last week’s suspected chemical weapons attack that killed at least 87 civilians.

The US strike on a Syrian air base destroyed a fifth of the Damascus regime’s remaining warplanes, Pentagon chief Jim Mattis said Monday as Washington fired a fresh salvo of warnings at President Bashar al-Assad.

May and Merkel “expressed support for the action of the United States and agreed with President Trump on the importance of holding Syrian President Bashar al-Assad accountable,” the White House said in a statement.

Downing Street said Trump and May had “agreed that a window of opportunity now exists in which to persuade Russia that its alliance with Assad is no longer in its strategic interest.

Earlier Russia’s President Vladimir Putin rejected allegations that Syria was behind the chemical attack, saying Syria had given up its chemical stockpile. Mr Putin, speaking on Mir television, also said trust had “deteriorated” between the US and Russia under the Trump presidency.

On Wednesday Russia has vetoed a draft resolution at the UN Security Council that would have condemned last week’s alleged chemical attack in Syria and demanded that Damascus cooperate with investigators. The resolution was presented by the US, UK and France, who reacted angrily to Russia’s decision.