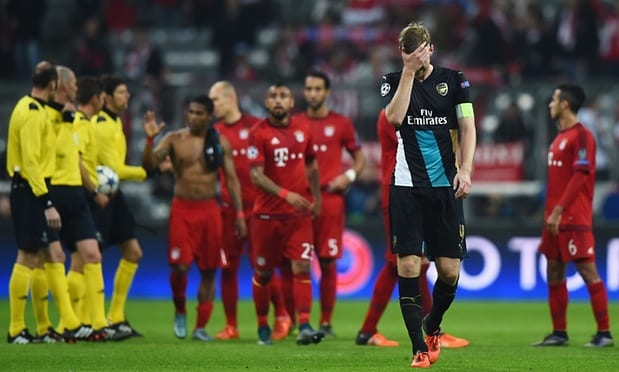 Arsenal outplayed and outclassed by Bayern

Arsenal are beaten after a second half collapse

Arsenal were thrashed 5-1 at the Allianz Arena for the second time in two visits and can consider themselves lucky to have conceded just five. Arjen Robben Robben opened the scoring for Bayern Munich with an exquisite first-half strike, which was cancelled out by Alexis Sanchez in a first half that, Arsenal were competing in and dominated towards the end.

This dominance made their second half collapse all the more spectacular, as Bayern ran amok after the departure through injury of Laurent Koscielny. Robert Lewandowski, who bullied Mustafi all night, headed Bayern back into the lead and then the outstanding Thiago Alcantara added two more. Thomas Muller came off the bench to add a fifth for good measure and leave Gooners seething.

This was another terrible European night, a dark night, for the ­under-fire Arsenal manager and he needs to take responsibility for this capitulation and reorganise his troops before Sanchez leaves.

The night belongs to the Germans, who on this occasion were simply too good, for the Londoners. And despite the monumental task of winning 4-0 at the Emirates stadium, a glimmer of hope that the Gooners can hold onto is, if anyone can do it, Arsenal can; who on their night, can be equally as destructive.

Arsenal fans & ex-players who continue to back him are now damaging this great club.
He has to go. #WengerOut

When your mom assignes two more chores before even completing the first one😂😂😂😊😊 #Arsenal #UCL #bayernvsarsenal #BayernMunich #wengerout pic.twitter.com/yiY2fnHCUO