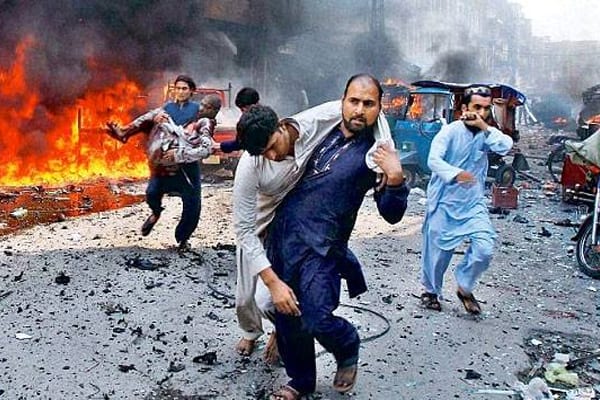 A powerful bomb blast on Monday ripped through a protest in the Pakistani city of Lahore, killing at least 13 people and wounding dozens. The explosion that went off in Mall Road, the cities vibrant area, caused havoc amongst civilians & pharmacists who were rallying against reforms for medicine/drug sales.

Jamaat-ul-Ahrar, a Pakistani Taliban-linked armed group, claimed responsibility for the attack, which has at least 13 confirmed deaths and close to a hundred injured, some of which have near fatal injuries. The death toll is expected to rise.

Inspector General (IG) Punjab police Mushtaq Sukhera said that they are investigating the Lahore attack from every angle, and said that culprits would not be able to save themselves from police and police would get them soon.

While reviewing the situation after the blast at Lahore’s Mall road, army rangers and personnel took control of security situation after cordoning off the blast site and four hospitals located in the vicinity of Punjab Assembly.

This also brings into question the conduction of Pakistan Super League’s (PSL) final in Lahore. Under current circumstances a cricket game may seem trivial, however, speculation had been growing since PSL’s announcement that some sort of destructive event was to be expected. In fact, National Counter Terrorism Authority (NACTA) has issued terror alert in Lahore on February 7. Many suspect an Indian hand in this debacle, however, speculation between the two enemies is a regular and daily occurrence.

The significance of an International cricketing event in Pakistan is of monumental proportions, with the cricket as part of its staple diet, millions have been yearning the return of cricket since the terrorist attacks against the Sri Lankan team a decade ago.

My Tweets
We use cookies to help identify your computer so we can tailor your user experience, track shopping basket contents and remember where you are in the order process. WTX News Our Cookie Policy
Baftas, Grammys & President Agent Orange & the Co-op is for sale
Trump’s UK visit is to be rescheduled
To Top
Weekly