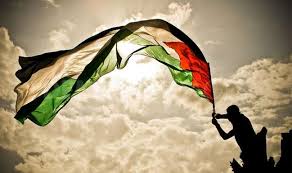 Israeli security force clash with Palestinian stone throwers following a demonstration demanding that Israeli authorities return the bodies of Palestinians killed during attacks on Israel, in the West Bank town of Bethlehem on January 26, 2017. A Palestinian was shot dead Sunday and five others were wounded by Israeli soldiers at the Jenin camp in the occupied West Bank, Palestinian medical sources said.

The person who was killed at the camp located in the northern West Bank was identified as 19-year-old Mohammed Abu Khalifa, the sources said.

The shooting occurred after an incursion into the camp by Israeli forces sparked clashes with young Palestinians, Palestinian security officials said.

Most of the Palestinians killed were carrying out knife, gun or car-ramming attacks, according to Israeli authorities, with others killed during protests, in clashes or air raids on Gaza.

Israel blames incitement by Palestinian leaders and media as a leading cause of the violence.

Israeli authorities have a policy where they confiscate the bodies of killed Palestinians since the violence began, often keeping them for many months as a means of deterrence and to prevent clashes during funerals.

Israel also practices a detention policy; where any suspected Palestinian can be held, in the in the interest of National Security, without a charge. In some cases this detention has been for almost 11 months, with teenage children it’s largest group of residents. It stands out because it presently uses administrative detentions as part of an open-ended military occupation. The reasons for capturing and detaining the Palestinians can range from, motivation provided by the death of a family member, where the Israeli Army has previously killed a relation and in order to prevent an attack he is subsequently detained.

Israel has occupied the West Bank since 1967, and is regularly expanding it’s border. Since Trumps inauguration Israeli authorities have authorised the development of a further 2000 homes.