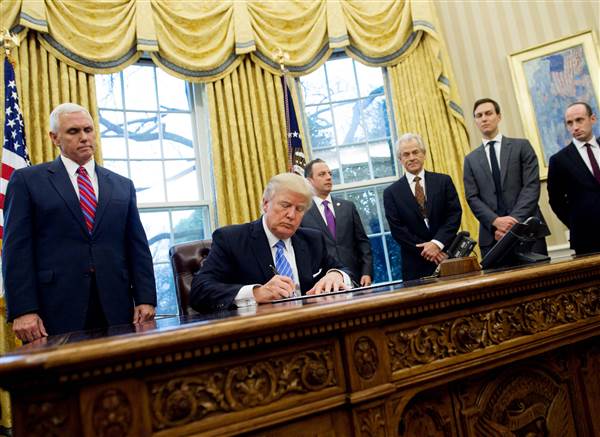 President Trump in his first full week in office, started by issuing the reversal of Barack Obama’s signature trade deal

President Trump in his first full week in office, started by issuing the reversal of Barack Obama’s signature trade deal, pulling away from Asia.  A signature theme of his campaign, reversing Obama’s TPP deal.

The TPP deal or The Trans-Pacific Partnership is a trade agreement which was designed to lower trade barriers between the member countries. Australia, Singapore, Canada and Japan were amongst the 12 state members. The idea was that if everyone brought down taxes on exported goods, U.S. companies would pay less for imports — while benefiting from cheaper labour overseas.

TPP was an attempt to create a single market for the U.S. and 11 countries that border the Pacific Ocean, including Canada, Mexico, and Chile. The idea was to make goods flow more freely and cheaply between all partners — who together represented one third of global trading.

However, since the TPP had not yet been approved by the Senate, it was a formality for the President to reverse the order. He had referred to this in his campaign as a deal for “special interests who want to rape our country.”

Australia open to China and Indonesia joining TPP after US pulls out. The Guardian

It's called shock therapy: "Republicans are trying to overwhelm you so you don't know what's going on." https://t.co/fY2wUDD3SI via @fusion

TPP had not yet been approved by The Senate

It was unlikely that it would get passed by the Senate

It had opposition from both sides of the House

Bernie Sanders was against it, Hilary  Clinton was also expected to reverse the agreement

It was a way of President Trump showing he means business, with an act that doesn’t really have a great deal of substance. But allows his supporters to put a ‘feather in their caps’. At least he has delivered on one of his campaign promises.

My Tweets
We use cookies to help identify your computer so we can tailor your user experience, track shopping basket contents and remember where you are in the order process. WTX News Our Cookie Policy
Woman’s March takes to the streets around the world.
Supreme Court to announce judgement on Brexit
To Top
%d bloggers like this: